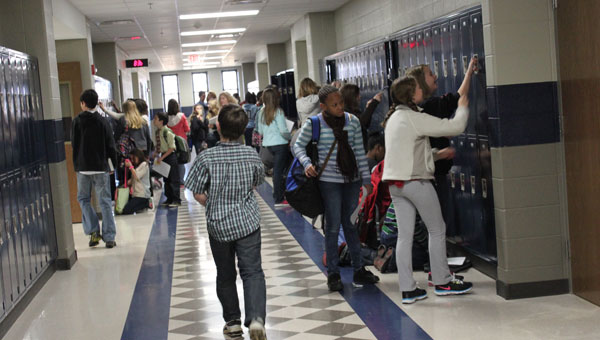 CALERA – Calera’s newest school was teeming with excitement and some mayhem as students and faculty alike attempted to find footing during the first day at Calera Middle School Nov. 26.

The school houses Calera’s sixth through eighth grades, which will free up space at both the former Calera Middle, which is now Calera Intermediate and serves fourth and fifth grades, and Calera High School, which houses ninth through 12th. Until CMS opened, the high school had about 1,100 students, which has now decreased to about 700, CMS Principal Brent Tolbert said.

CMS originally was planned to open prior to the fall 2012 school year, but weather and construction delays pushed back the opening until after Thanksgiving.

The $11.7 million facility encompassed the former Shelby Academy facility. The school currently houses about 600 students, but has the capacity for about 800 with room for a possible additional building, Tolbert said.

“It’s a model for what we want in all of our schools,” Day said.

“I’m just excited to have sixth, seventh and eighth grades under one roof,” Tolbert said.

Pelham triple-murder suspect could appear in court in February