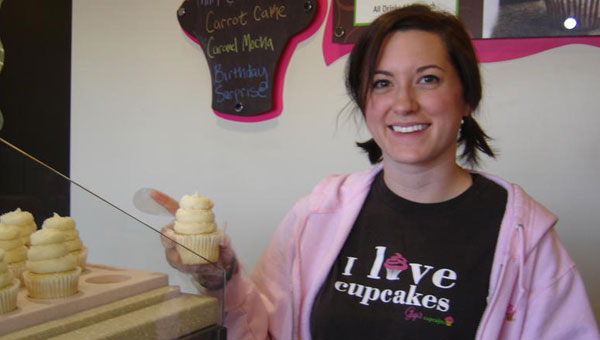 Gigi’s District Manager Sara Sawyer shows off a Wedding Cake cupcake that is a best seller every day and is very popular in place of a wedding cake these days. Gigi’s offers cupcake tiers that attractively display the cupcakes for weddings and other special functions. (Contributed)

If you haven’t heard the story of Gina “Gigi” Butler and her cupcake company, let me tell you how this Nashville-based outfit came to be.

Born in Oklahoma, Gina grew up on a small-town farm in California, where she learned about hard work. At 15, she bought some mops, brooms and a bucket and hiked down the road to an assisted living facility to do cleaning for the residents. Later on, she headed for Nashville because she loved to sing. Supporting herself via waitressing and cleaning, she met with sporadic success as a singer. Then, her brother called from New York where he had just spent two hours waiting in line at a cupcake shop.

“These things aren’t as good as the ones you and Mom make,” he said. “You should open a cupcake shop in Nashville!”

She decided to give it a go. She managed to borrow and scrape together enough money to get the doors open and run for a week. At the end of the week, she paid all of her bills and still had $300 left. Franchising has allowed Gigi to expand to 50-plus stores and growth continues, including in Alabama with 11 locations across the state.

Shelby County residents can find the Hoover store on U.S. 31, just north of Riverchase across from Big Lots. Gigi’s offers gourmet cupcakes generously frosted and decorated for $3.25 each. Mini cupcakes are $15/dozen. Individual cheesecakes are new to the menu at $3.75 each. Gigi’s is open six days a week from 9 a.m. to 8 p.m.

Sara Sawyer is the district manager for the Hoover and Tuscaloosa stores.

“We are doing tons of weddings. We have cupcake tiers that hold plenty of cupcakes and look great. People love the convenience, too,” she said.

With regular flavors like Scarlett’s Red Velvet, Hunka Chunka Banana Love and Mochachino, you might want to remember that they are cheaper by the dozen. Gigi’s will be offering special holiday cupcakes decorated for the season.

Learn more at GigiscupcakesUSA.com or call the Hoover store at 444-4170.