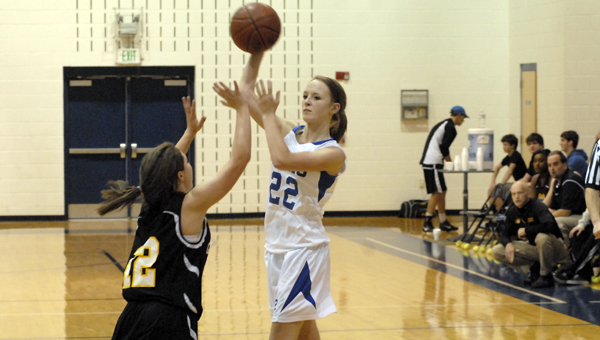 Kingwood's Madelyn Pearce dishes the ball to a teammate in the Lady Lions' 52-44 loss to Autauga Academy on Nov. 26. (Reporter photo/Graham Carr)

Lady Lions’ coach Andrew Pearce said his team came out with not a lot of enthusiasm and it showed in their performance.

“Rough game, we probably should have won,” Pearce said. “I have a girl sick, who is our best post player, but can’t make excuses− we didn’t come to play.”

Without the depth at the post, the Lions had trouble stopping the Autauga post players, especially Raegan Shockelford, who had 21 points and 12 rebounds.

Autauga jumped out to a 6-2 lead in the early going, but Kingwood fought back to tie the game at eight apiece, going into the second quarter.

The Generals responded by finishing the half on an 7-3 run, taking a 22-18 lead into the half.

In the third quarter, Autauga had an answer for every run the Lions tried to make.  After Kingwood closed the gap to 22-19, the Lady Lions watched Autauga build a 26-21 lead, before closing the gap again to 29-25. Unfortunately for the Lady Lions, they could not get any closer than four points and trailed 33-28, heading into the fourth quarter.

The final quarter had an abundance of runs by both teams.  The Generals opened the final quarter with a 10-1 run, building their biggest lead of the day at 39-29, but Kingwood battled back with a 8-4 run of their own, cutting the lead to 43-37.

Trailing 48-39, Kingwood put together one last run and scored five straight points, cutting the Generals’ lead to 48-44 with just over 45 seconds left. The run lost steam though, allowing Autauga to hold on for the win.

Vincent falls at home to Winterboro