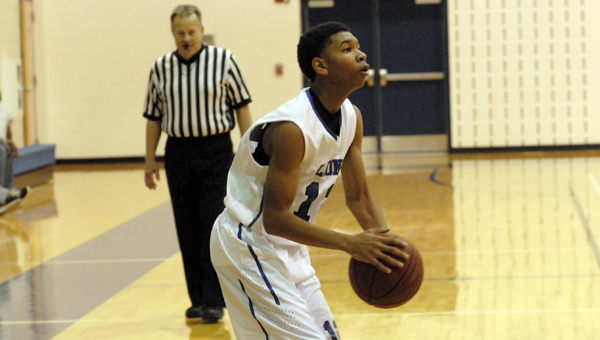 ALABASTER – The Kingwood Christian Lions used a big second quarter and solid second half to cruise to a 75-26 win over the Autauga Academy Generals on Nov. 26 at Kingwood.

Danny Davis said his team’s defense carried his teams’ slow offensive start until the offense could get going.

“Once we settled down we started attacking the basket better instead of settling for the jump shots,” Davis said.

Kingwood’s big men posed a problem all night for the smaller guard-oriented Generals.  The Lions had many second – chance opportunities and were able to deflect many Generals’ passes, messing up the Generals’ offensive rhythm.

The Lions established their dominance early on with leads of 4-0 and 7-2.  The Lions biggest lead of the first quarter was 15-6 at the 1:45, but the Generals outscored the Lions the rest of the way, closing the gap to 20-12 heading into the second quarter.

The Lions exploded in the second quarter outscoring the Generals 26-4, including a 17-0 run from the 5:50 mark to the 1:55 mark.  The Lions’  run was helped by a couple of three-point shots from Purvis and layups by Fillingim

The third quarter was more of the same with the Lions starting with a 13-3 run.  By the end of the quarter, Kingwood had again outscored Autauga by a big margin of 24-9.

The Lions put in backups for much of the fourth quarter, but were able to still shut out the Generals with stingy defense.  Offensively, the Lions played ball control, scoring only five points in the entire quarter.