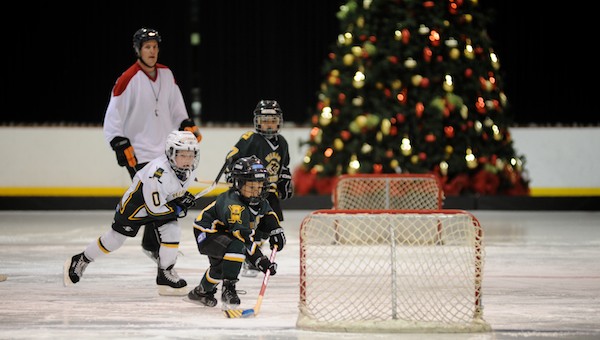 Pelham kicked off the holiday season by lighting the city’s enormous Christmas tree in front of a capacity crowd at the Pelham Civic Complex on Nov. 26.

The event marked the 14th tree lighting held in the Civic Complex’s main ice arena, and was the first to be emceed by new Pelham Mayor Gary Waters, who took office in early November.

“I’m so glad you are all here in your facility,” Waters said of the Civic Complex. “The Pelham Beautification Board put in a lot of work to bring this to you. Putting this on is no easy task. It’s very difficult.”

The Pelham High School jazz ensemble entertained the hundreds of visitors as they entered the Civic Complex by playing a plethora of jazzed-up Christmas classics, and Hope World Outreach Ministry Pastor Earl Gardner offered the invocation.

Before opening the event with a prayer, Gardner encouraged those in attendance to remember Pelham’s public servants during the holiday season.

“I want us to make a covenant tonight to pray for the city of Pelham, the mayor and our City Council,” Gardner said.

Pelham Homeowners Association President Mildred Lanier sang the national anthem and led the crowd in singing “We Wish you a Merry Christmas.” The Pelham Fire Department colorguard and representatives from the Pelham-based Boy Scout Troop 404 presented the colors at center ice.

“So many times, we take the things we enjoy at Christmas for granted,” Shaw said, encouraging those in attendance to support the American Red Cross as it helps Hurricane Sandy victims. “I hope you’ll take the time at Christmas to remember your blessings.”

At the end of the event, Santa Claus made his grand entrance on a Zamboni ice resurfacing machine, and greeted hundreds of kids who lined up along the edge of the ice rink.

FROM STAFF REPORTS MONTEVALLO – The University of Montevallo women’s basketball team received a signed letter-of-intent from Bre’ana Singleton during the... read more