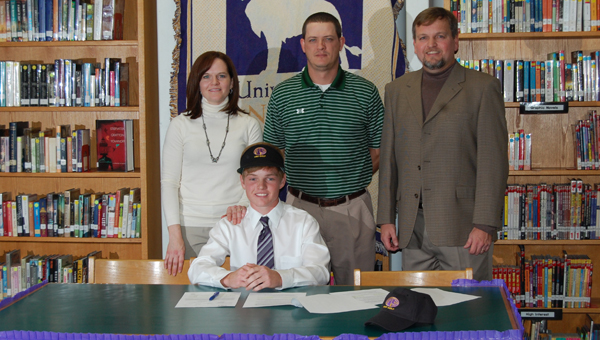 PELHAM – Pelham senior Connor Slane signed his letter of intent to play golf at the University of North Alabama at a ceremony at Pelham High School Nov 26.

“I’ve put in a lot of hard work the past few years and I feel like it’s starting to pay off,” Slane said on signing with the Lions.

Slane was recruited by several other schools including University of Montevallo and South Alabama, but committed to North Alabama because “it really felt like home.”

“When I took a visit, I really liked where it was,” he said. “It was a great fit for me. I’m really looking forward to it.”

Slane is nationally ranked in the top-100 of the class of 2013. The Pelham senior is No. 85 in the Polo Junior rankings and No. 96 in the Golfweek Magazine rankings.

Slane has played for Pelham since he was in the seventh grade and the last three years under Panthers’ head coach Phillip Lawson.

“He’s the kind of kid that’s on the golf course 365 days a year,” Lawson said of Slane. “He’s such a talented kid that I’ll take adjustments from him on things to work on.”

During the summer, Slane competed at the US Junior Amateur Championship in Stratham, New Hampshire.

“I didn’t play terrific up there, but it was a great experience and I just really enjoyed it,” he said. “I’ve been progressing and getting better during the summer. I feel that’s due to all my hard work, so I’m going to continue to work hard and hope for the best.”

Lawson said Slane succeeds on the golf course because he doesn’t let the circumstances of his round get to him.

“His demeanor stays the same,” said Lawson. “He is all business and thinks about the next shot. The way he carries himself at such a young age is impressive.”

Slane said that playing golf at Pelham will help him make the transition to the collegiate level.

“I’ve gotten to play in several high-quality fields during the spring,” he said. “There’s a lot of Division I signees at schools around here so I get to play against them. It’s very competitive and that’s good for me.”

FROM STAFF REPORTS MONTEVALLO – The University of Montevallo women’s basketball team received a signed letter-of-intent from Bre’ana Singleton during the... read more