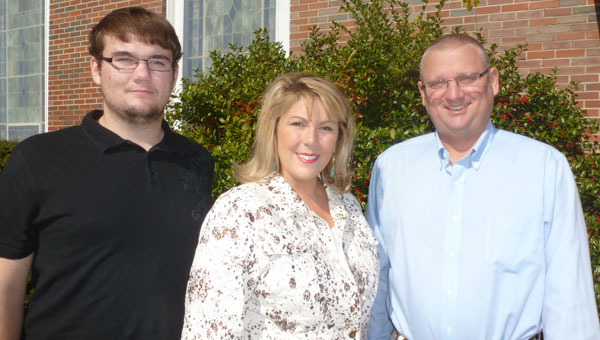 Stacy Walkup is the grand marshal of the Columbiana’s Home Town Christmas Parade, which will be Thursday, Dec. 6 at 7 p.m.

Walkup, the daughter of Beth and Dan Hedrick, grew up in Shelby County, graduated from John Carroll High School and received a business degree from the University of Mississippi. Walkup and husband, Kevin, moved to Columbiana in 1998 after purchasing a home on Mildred Street, where she was a stay-at-home mother to son, Grant.

Several years later, Walkup had started her own business, “The Little Red Hen,” and learned the ins and outs of a retail business. After the business sold, Walkup was looking for something new to do. One day former Columbiana resident Katie Robertson and Bonnie Atchison were in her shop. Atchison was retiring from her position as executive director of the South Shelby Chamber and overheard Robertson asking Walkup what she was going to do after her shop closed. Atchison told Walkup she should look into the director position.

“I felt it was a God thing,” said Walkup. “I sent my resume to Richard Cook, who interviewed me and I was given the job.”

For the next 10 years, membership increased in the SSCC from 100 to 450 as Walkup partnered all the South Shelby cities: Chelsea, Columbiana, Harpersville, Vincent, Westover and Wilsonville. Under her leadership, the Chamber increased communications through email, e-newsletters, membership directories, website and Kaleidoscope newsletter. She worked to enhance programs such as Coffee with the Mayor, Ambassador Program, City Spotlight, Diamond Awards, Jeff Falkner Memorial Golf Tournament, Johnny Lowe Scholarships, Health Fairs and Business Expo. She introduced a strategic plan, Board of Directors’ retreats, and assisted other educational partnerships in receiving educational grants. Through her dedication and committed leadership, Walkup established many beneficial relationships that led to the success of the SSCC.

Walkup recently resigned as executor director of the SSCC to pursue a new business opportunity to work with senior citizens, a true passion of hers.

“My family and I enjoyed my years at the SSCC and learned something from everyone I worked with,” said Walkup.