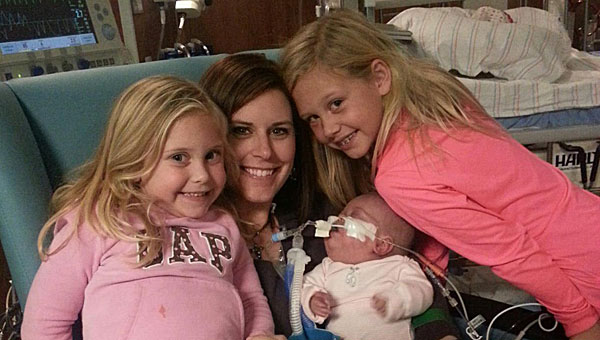 From left, Layla, Amy, Halle Scott and Marlee Windham have seen an outpouring of community support since Halle Scott was born to Amy and her husband, Jeffrey, prematurely in April. (Contributed)

Several businesses and groups in Alabaster and Pelham have been banding together over the past several months to support the family of a baby born about 15 weeks premature in April.

Halle Scott Windham was born to Alabaster residents Amy and Jeffrey Windham in mid-April, and has spent the past seven months fighting for her life at local hospitals.

When she was born, Halle Scott weighed 1 pound, 9 ounces and was 12 inches long. Today, she weighs about 10-and-a-half pounds.

Since hearing about the Windham family, several local businesses and organizations have joined together to hold fundraisers to help offset the family’s rising medical bills.

On Nov. 17, the Alabaster-based Kona Ice company set up shop at the Jefferson-Shelby Youth Football League championship game at Thompson High School’s Larry Simmons Stadium, and donated a portion of the day’s proceeds to the family.

“When we put the information (about the family) on our Facebook page, we got more likes and comments than I’ve ever seen before,” said Alabaster Kona Ice owner Kevin Butler.

Butler said Kona Ice holds fundraisers for many local organizations, and said he decided to help the Windhams after one of his employees told him about the family’s struggles.

The Alabaster Parks and Recreation Department has also been supporting the Windhams by sending out emails sharing the family’s story, and by displaying supportive messages on its marquee board.

“(Halle Scott’s) sister is a cheerleader for our 90-pound football team, and the family called and asked me if they could sell bracelets at football games,” said Alabaster Parks and Recreation Director Tim Hamm. “We all have a soft spot in our hearts for the family.

“In today’s economy, it’s hard enough to drive back and forth to work. Not to mention driving back and forth to the hospital every day and paying medical bills,” Hamm added. “It’s something we felt we should do.”

Several other businesses, such as the Sonic restaurant in Pelham, the Dairy Queen in Alabaster, Lady Bug Lane, Celebrity Video and more, have also held fundraisers for the family over the past several months.

“I continue to ask for prayers daily. Not only for me and this baby, but for my husband and (two) girls,” Amy Windham wrote on her Facebook page. “I can not thank you enough all the prayers, comments and scriptures.”

To follow the family’s story, or to purchase a bracelet, visit Facebook.com/PRAYERSFORAMYANDBABY.

FROM STAFF REPORTS MONTEVALLO – The University of Montevallo baseball team participated in the Light the Night Walk for the... read more