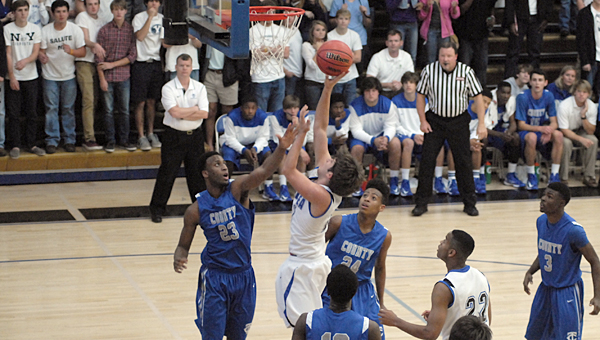 CHELSEA – The Chelsea Hornets made a run to end the first half, but was unable to carry the momentum to the third quarter to fall to the Tuscaloosa County Wildcats 57-42 at home Nov. 27.

The Hornets (2-4) trailed 16-10 at the end of the first quarter, but responded in the second. Chelsea held Tuscaloosa County scoreless for over five minutes to go on a 6-0 run to even the game 16-16 late in the first half. David Simpson hit a 3-pointer from the top of the arch to give Chelsea their first lead of the game, 19-18.

Tuscaloosa County scored five unanswered points fore a 23-19 lead, but Chelsea closed within one, 23-22 with 28 seconds left on the clock.

Que Hall hit a three for the Wildcats with a second left to extend their lead to three, 26-22.

Malik Abrams opened the scoring in the third with a three from the left win to bring the Hornets back within one, 26-25. He added a three about a minute later to bring Chelsea within two, 30-28.

The Wildcats held Chelsea to just five points in the fourth to seal the 57-42 victory.

Simpson led Chelsea with 13 points, including three 3-pointers. Abrams hit three shots from beyond the arch in the third to finish with 11 points in the game. Austin Washington added 10 points for the Hornets.

Christopher Johnson led all scorers with 17 points for Tuscaloosa County while Javel Bailey and Hall each had 12 points.

FROM STAFF REPORTS KANSAS CITY, Mo. – The University of Montevallo men’s basketball team remained No. 21 in the latest National Association of... read more