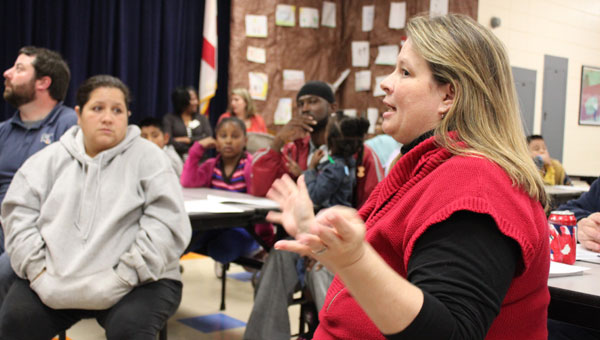 MONTEVALLO – The Montevallo Elementary Parent-Teacher Organization held a meeting to hear parents’ concerns about mold and other sanitation issues at the school Nov. 27.

The PTO passed out an “MES Cleanup Timeline” to about 80 parents, which documented what the PTO has accomplished since addressing the Shelby County School Board Sept. 20.

PTO President Michele Gallagher shared a letter from the BOE, which stated that BOE members refrained from attending the meeting due to short notice and the PTO’s apparent hiring of Birmingham attorney U.W. Clemon. The letter also stated BOE leadership would visit Montevallo regularly and leaders would “welcome the opportunity to meet with the PTO board.”

Clemon, a retired federal judge, said the PTO had not retained his services at the current time, but several MES parents have hired him to investigate the situation.

Hilary Whitson, an art teacher at Montevallo High and Montevallo Middle, has a 6-year-old son at MES.

“I want to know my child is safe and is not going to get sick,” Whitson said.

One parent asked how many parents’ children have experienced respiratory issues while attending the school. Approximately a fourth of the parents raised their hands.

A fifth-grader’s father said the best thing that has happened for his son’s health was when the fifth graders were moved from the school and placed in portable classrooms.

MES parent Michelle Smith asked why the BOE built a “castle” in Calera Middle School, which has a Montevallo address, to deal with overcrowding, “but we can’t get a new school.”

“My child’s health is more important than them sitting on top of each other,” Smith said.

George Henry, MES parent and Alabaster’s city administrator, said the BOE refinanced bonds and borrowed additional funding more than a year ago to build new facilities in Chelsea, Calera and Alabaster. With Alabaster’s pending separation from the Shelby County school system, Henry asked where the BOE has moved the funding intended for the Alabaster school.

“While I’m not a medical doctor, it bothers me (my son) has respiratory problems he’s never had,” Henry said. “What solution are we looking for?”

Gallagher said the PTO board intends to be “open” with the BOE and will present parents’ concerns to the school board in the future.

FROM STAFF REPORTS MONTEVALLO – The 16-year-old girl who went missing from her Montevallo home has returned home safely, according... read more