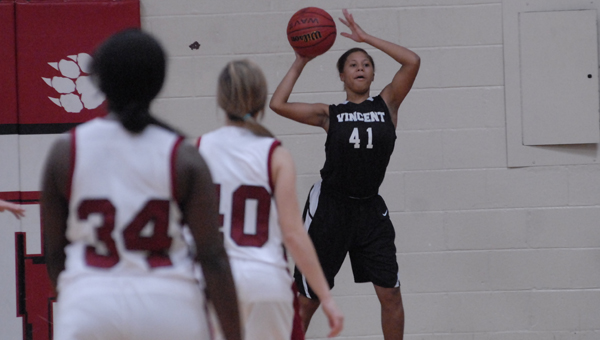 COLUMBIANA – The Shelby County Lady Wildcats earned their first victory of the season over the Vincent Lady Yellow Jackets, 66-29 at Shelby County on Nov. 29.

“After a couple of tough games, it was nice to get a victory,” Wildcats coach Ashley Phillips said. “We still have a ways to go, but the first win is always the toughest to get.”

Vincent guards were constantly under duress from the Wildcats’ full-court press which led to 25 Yellow Jackets’ turnovers in the first half and 40 total turnovers for the entire game.

“I thought our press was pretty effective,” Phillips said.

The Wildcats jumped to a comfortable 27-4 lead at the end of the first quarter, led by Hallie Brown’s 13 points in the period.

In the third quarter, Vincent held its own against Shelby County, alternating buckets with the Wildcats while forcing seven turnovers.  The Yellow Jackets’ were only outscored 15-14 in the quarter.

In the final quarter, the Wildcats controlled the clock on offense and let their full-court press slow down the Vincent attack.  Shelby County only scored nine points in the quarter, but held Vincent to just a point.

Jones had a solid night for Vincent hitting four 3-pointers and finishing with 20 points.