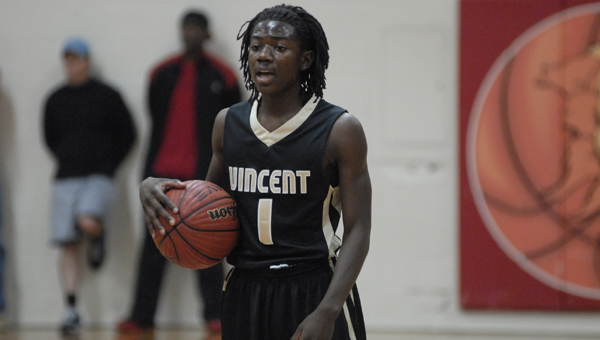 Vincent's Tyler Williams calls out a play to his teammates in the Yellow Jackets' 49-45 loss to the Shelby County Wildcats on Nov. 29. (Reporter photo/Graham Carr)

COLUMBIANA – The Shelby County Wildcats (4-2) overcame a fourth-quarter deficit  to beat the Vincent Yellow Jackets, 49-45 at Shelby County on Nov. 29.

For almost 27 minutes, the Class 2A Yellow Jackets either were tied or had a lead with their Class 5A rivals.  The Wildcats did not achieve their first lead of the game until the 5:31 mark of the fourth quarter when Tyler Madison made a layup, making the score 36-34.

“Vincent is a good team and they are very well coached,” Dickinson said. “We knew it was going to be a dogfight from the beginning to end and we are just happy we came out on top.”

The Wildcats’ big-man tandem of Madison and Brandon McKinney fueled the comeback. Madison finished with 29 points while McKinney added 11 points.  Shelby County’s power forward-center combo carried the Wildcats for 25 straight points in the second half.  The only other Wildcat to score in the final two quarters was Cedric Youngblood’s three free throws in the final 24 seconds of the game.

“Our strength is inside while Vincent’s strength is in its guards on the perimeter, using their quickness,” Dickinson said. “We just tried to pound the ball inside as much as possible and let Madison and McKinney touch the ball every possession.”

The game started with Vincent (2-1) scoring on five of its first six possessions, including 3-pointers by Tyler Williams and Anterio Rogers, to take a 12-4 lead four minutes into the game.  Shelby County responded by finishing the opening quarter on an 8-0 run, tyingthe game at 12 apiece.

The teams’ traded baskets until Madison closed the gap to 22-21 with just under a minute left to play in the first half.

After a timeout, Vincent guard Vec Hamilton hit a 3-pointer with seven seconds remaining to lift the Yellow Jackets to a 25-21 halftime lead.

The third quarter followed the same script of the first half with Vincent fighting off any run Shelby County tried to make.  The Yellow Jackets were able to sustain the lead and take a 34-30 lead into the fourth quarter.

Shelby County came alive in the fourth quarter opening with a 10-0 run, but the Yellow Jackets did not go away lightly.  Vincent closed the gap to 46-43 with 55 seconds left when Hamilton hit another 3-pointer, but the Yellow Jackets could not get any closer than three points, as Youngblood made three-of-four free throws down the stretch.

Vincent was led by Rogers’ 15 points and Williams’ 11 points while Hamilton finished with nine points.

Vincent runs away for win

The Vincent Yellow Jackets started their game against B.B. Comer fast and didn’t let up for a 69-32 win Nov.... read more