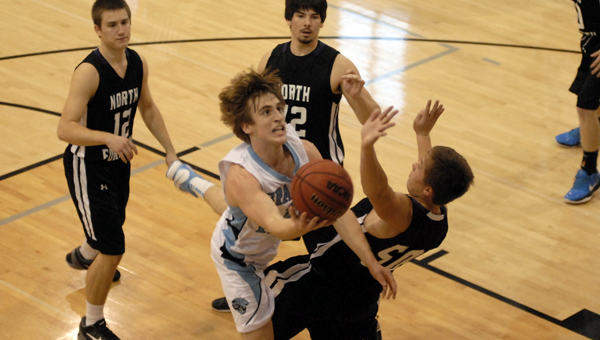 NORTH SHELBY – The Spain Park Jaguars rallied in the fourth quarter, but they were unable to grab the lead late in a 44-41 loss to the North Forsyth Raiders Nov. 30.

The Jaguars (3-6) trailed 32-20 headed into the fourth quarter, but made a run to threaten the Raiders. Spain Park was held scoreless for nearly three minutes to start the fourth, but Austin Jones converted on a three-point play to spark the Jaguars’ rally. Jones scored six points of a 9-0 run to bring Spain Park within three, 34-31, midway through the fourth.

North Forsyth hit six free throws to extend its lead to go up seven, but Jones scored five points down the stretch to make the score 42-38 with five seconds left.

Jonathan Toups hit a three at the buzzer to make the final 44-41 score.

Spain Park battled for a 7-6 lead in the first quarter, but the Raiders closed with a five-point run to take a 11-7 lead at the end of the quarter. North Forsyth outscored Spain Park 8-2 in the second to claim a 19-9 halftime edge.

The Raiders extended their lead with a 13 point third quarter for a 32-20 advantage headed into the fourth.

Jones led all scorers with 17 points for the Jaguars while Drew Morgan added eight points.

The Nov. 30 matchup marked the return of Brian Moon to Spain Park. Moon was the Jaguars’ head coach from 2001 to 2010 when he left to become the head coach at North Forsyth.

FROM STAFF REPORTS TUSCALOOSA – The Alabama hockey team will play Mississippi State University at 9:00 p.m. on Friday, and... read more