Warriors down Eagles in showdown 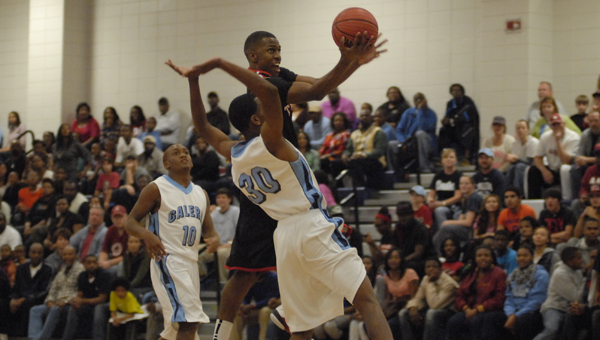 CALERA – The Thompson Warriors renewed their rivalry with the Calera Eagles and walked out with a 67-53 victory Nov. 30.

The Calera gym was a packed house full of fans eager to see what began as an intense matchup.

“Anytime these two teams get together it’s usually a pretty good one and pretty intense,” said Thompson head coach Patrick Davis. “This kind of atmosphere is what high school basketball is about.”

Thompson (8-1) took control of the game early and led 11-3 just over three minutes into the game. Calera (2-3) responded on an 8-0 run started by a Henry Davis 3-pointer and capped by a three from Ronnie Clark to even the score 11-11 with under two minutes remaining in the first.

The Warriors answered with an 8-0 run of their own, including a three by Duke Thomas at the buzzer, to take a 19-11 advantage into the second quarter.

“We knew it was going to take a great effort from us,” said Calera head coach Robert Burdette. “Whenever we had any kind of a push, they had an answer. That’s the sign of having a good team.”

Clark brought the Eagles within four, 21-17, early in the second but Thompson didn’t allow Calera to get any closer. The Warriors went on a 12-3 run led by Marcus Lewis and Caleb Johnson to extend the Thompson lead for a 39-23 edge at the half.

Calera opened the second half on a 8-2 run to cut the deficit to 11, 44-33, midway through the third. The Warriors regrouped and only allowed four points in the last four minutes of the quarter to take a 50-37 into the fourth quarter.

The Eagles again were able to cut the Thompson lead down to 11, but wasn’t able to get any closer. The Warriors went on a 9-0 run in just over a minute and a half to extend the lead to 20, 67-47 with just over two minutes left.

Jordan Bishop scored six of his eight points in the remaining two minutes but it wasn’t enough to top the Warriors.

Clark led all scorers with 24 points including three 3-pointers in the game for Calera. Davis finished the game with 12 points.

Thompson’s Lewis and Johnson each scored 17 points to lead the Warriors. Deandre Gamble scored 14 points and pulled down a team-high 12 rebounds in a double-double performance. Thomas finished with 10 points.