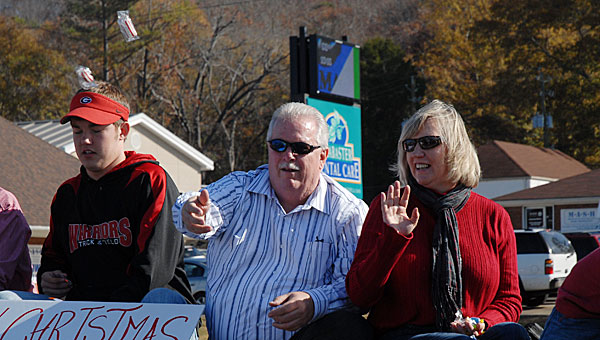 Several groups walked away with awards ranging from most entertaining to best holiday spirit after they took part in the Alabaster Christmas parade on Dec. 1.

Despite unseasonably warm temperatures hovering in the high 60s through most of the parade, thousands of spectators lined U.S. 31 to get a glimpse of the more than 75 groups taking part in the annual Alabaster Christmas tradition.

The city set up a judging stand in front of City Hall, and parade participants stopped in front of the stand to perform for the judges.

The Most Entertaining award went to Joy’s Dance Company, which featured the local band “2 Blu and the Lucky Stiffs,” and the Best Walking entry went to the Knights of Columbus from the St. Thomas the Apostle Catholic Church.

Boy Scout Troop 220, which is based at Westwood Baptist Church, took home the Best Holiday Spirit award, Reliable Overhead Door won the Best Use of Theme award and the Most Creative Award went to the Shelby 4-H Horse Club.

This year marked the parade’s return to U.S. 31. After being held on U.S. 31 for decades, the event moved to the Colonial Promenade shopping center in 2011.

Other than train-related delay and an accident involving a child falling off a float, the return to U.S. 31 was a success, Alabaster City Administrator George Henry said, noting the city also added restrooms along the parade route this year.

Santa to visit Smith Chiropractic for Toys for Tots

FROM STAFF REPORTS CHELSEA – Santa and one of his elves will help bring in donations for Toys for Tots... read more