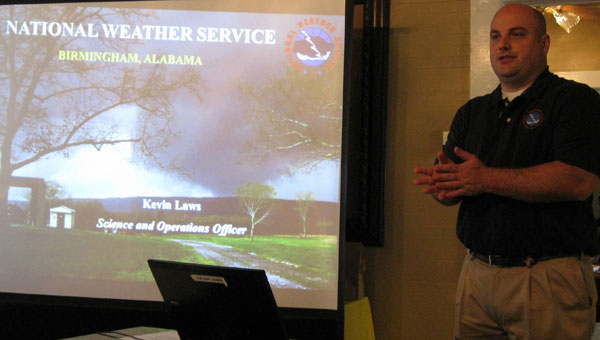 Kevin Laws, science and operations officer at the National Weather Service, said a car can float in only six inches of water. Laws presented a PowerPoint presentation to the Calera Civitan Club members on Oct. 25.

Laws works at the Shelby County Airport office, whose mission is to protect life and property for 39 Alabama counties across north and central Alabama.

Laws identified surrounding counties, which impact Shelby County’s weather. “If you hear warnings for Jefferson, Tuscaloosa, Bibb, Perry, Marion, Walker, Fayette or Hale, guess who’s next?” he asked. “Situational awareness and being aware of what’s happening is rule number one of preparedness.”

The center uses observation stations located at major airports, river gauges and upper air stations to collect data. Laws asked for a scientific reason why some counties have a greater amount of tornadoes than their neighboring counties. Members had many theories, but all were wrong.

“This was a trick question because it’s to prove statistics can tell you anything,” Laws said. “It’s population density. More people see and report tornadoes in Dallas than Perry — meteorologically there’s no difference. There’s been an increase in sightings since Doppler Radar came onboard in the early ‘90s and now people use cell phones and the Internet to report them.”

Tornadoes occur anytime of the year, the two peak seasons are spring months of March, April and May and fall months of November and early December. Law said when Katrina made landfall it wasn’t the wind people were concerned about, it was water. Never drive through a flooded roadway.

A severe thunderstorm has greater than 60 mile-per-hour winds. The safest place during a storm is a shelter such as a basement or under a strong table. Mobile home residents should seek shelter or lie flat in a ditch with hands shielding their head, and motorists should attempt to determine the tornado’s path to outrun it or take shelter in a ditch.

A weather radio is the most reliable method of staying informed during severe weather because of battery back-up. Cell phones aren’t dependable because towers are shut down to allow only emergency traffic, or television if you lose power.