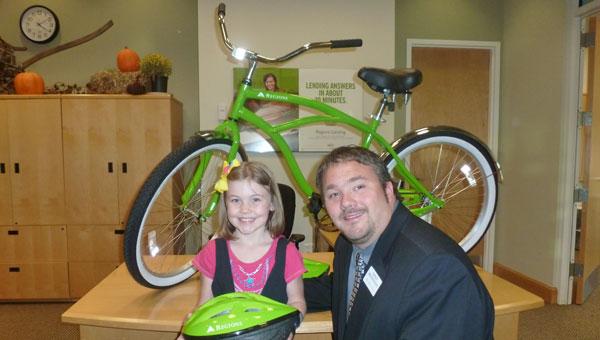 Brookelyn Glass receives her new bike and helmet that she won at Monsterwalk from Regions Columbiana Manager Jimmy Henderson. (Contributed)

A new bonus treat was added to the annual Monsterwalk, which was sponsored by the Columbiana Merchants and Professional by Regions Bank of Columbiana. A new bike was given to the lucky winner of a drawing available to all who attend.

“Regions wanted to bring more excitement to Monsterwalk,” said Henderson. “Our goal is to be more involved in the community.”

Glass is big sister to 17-month-old brother Landyn Mason Gage. Her parents are Kristi and John Keenum of Columbiana; grandmothers are Jackie Davis (Calera) and Diane Keenum (Columbiana); and great-grandparents are John and Pat Davis (Alabaster). Glass dressed up in her favorite character, Snow Bites, from her favorite show “Monster High.” This precious; outgoing girl loves school especially math and reading. She has read 208 books so far this year.

“This is the biggest thing I have ever won,” said Glass. “I was freaked out when I heard I won it. I am going to wash it and keep it so clean. I will never let it get dirty.”

“Monsterwalk was a huge success this year,” said Susan Conn, owner of Main Street Florist and chair of the event. “We had more merchants, businesses, churches, individuals than ever before.”

Between 2,000 and 3,000 children and adults attended the Halloween event and received candy and treats. Lines of people went up and down North and South Main Street in Columbiana, and the bike registration for the drawing wss in front of the Old Courthouse.

“It is our way to give back to the community,” said Wayne Johnsey, Columbiana Merchants and Professionals Association president.