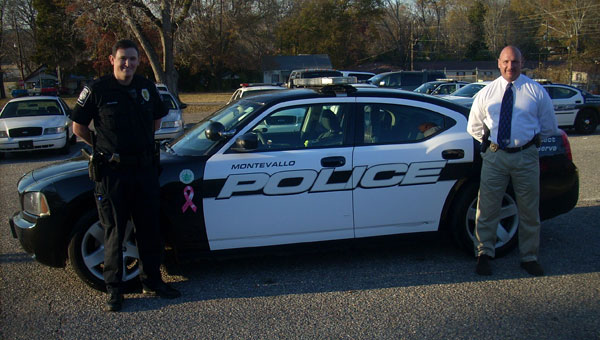 Officer David Holloway, under the administration of Interim Chief Jeremy Littleton, had the idea for the police officers to purchase pink magnetic ribbons, according to a release from Montevallo Police.

“It’s so thoughtful that they’re doing that,” Cost said. “I just think that’s very meaningful, and I’m hoping it’ll bring public awareness and more support for the cause.”

Each officer contributed money to purchase a pink ribbon to be displayed on the assigned patrol cars Nov. 27. This is a very small gesture on the behalf of the police officers to show their support for the mayor and others battling this disease. The officers hope to make a large impact on breast cancer awareness in a city that Cost loves dearly, the release stated.

“All of us have been touched by the dreadful impact of breast cancer, whether to a family member, friend or a colleague,” Littleton wrote in the release. “That is why our department is committed to raising awareness of this disease, and is supporting programs that will help save lives, give hope and care to those who really need it.”