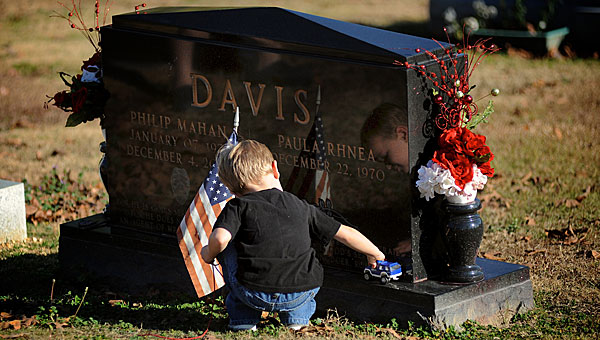 “I remember going to the funeral, and it’s one of the most moving funerals I’ve ever been to,” Hayes said on Dec. 3, one day before the anniversary of Davis’ death.

On Dec. 4, 2009, Davis became the first Pelham police officer to be killed in active duty when he was shot and killed during a traffic stop on Interstate 65.

Every year since Davis’ death, the city has remembered and honored his sacrifice by displaying a wreath in the Pelham Police Department’s lobby for several days before transporting it to Davis’ grave in the Southern Heritage Cemetery off Alabama 119.

“It was a very moving event,” Hayes said. “Please keep that family in your thoughts and prayers. By all accounts, (Davis’ widow) Paula Davis is a very independent woman, but she is still hurting.”

Pelham Police Department Capt. Larry Palmer, who worked for many years with Davis, said the department will display the wreath and hold the memorial ceremony every year to keep Davis’ memory alive.

“We don’t want to ever forget Philip. He will forever be a part of us,” Palmer said. “He was a great human being. It’s hard to lose someone who does right and does it for the right reasons.”

Palmer, like many other Pelham officers, said he will forever remember Davis’ sense of humor.

“He would give you this face, and then cut his eyes a certain way. All you could do was laugh,” Palmer said. “I will never forget that.”

Palmer said his faith has helped him get through Davis’ death, and said he is looking forward to seeing him again one day.

“In my faith, this is not the final chapter. This is just a stop along the way,” Palmer said.

Participants in Alabaster's city sports leagues will no longer have to register in person at the Depot office after the... read more