Fuller: MES is a ‘clean environment’ 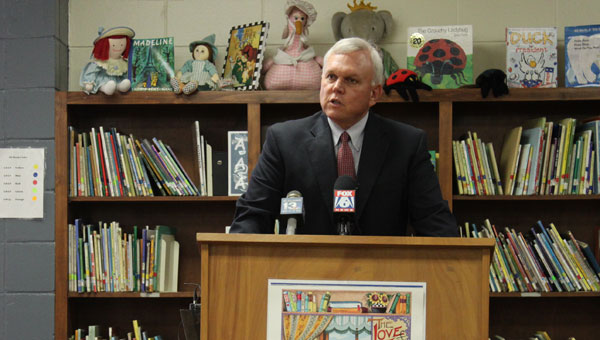 The school system invited city leaders, the Shelby County School Board members, teachers, school leaders and the Parent-Teacher Organization board to the meeting Dec. 2. None of the PTO board was present at the meeting.

According to a forwarded email to PTO President Michele Gallagher, Fuller sent the meeting invitation email at 9 p.m. the night before the meeting.

Fuller said he takes responsibility for the “breakdown in the line of communications” between school system leadership and MES parents and staff.

The purpose of the meeting was to offer attendees the opportunity to question Bill Young, CEO of ERG Environmental, an independent environmental consulting group in Pelham that conducted air quality testing in the school.

After sending a note home to parents Nov. 30 to explain the school’s mold situation, Fuller decided to call a meeting with school faculty and administration. Fuller said he invited media organizations to the meeting when some parents kept their kids home from school Dec. 3.

ERG Vice President Lamar Gilliland, who conducted the site’s testing, said the initial air quality sample was taken Sept. 21, then an additional 20 random samples on Sept. 22. Twenty-six samples were taken Nov. 14, and then two more rooms were sampled Nov. 26, including the lunchroom.

Fuller said he is in the process of scheduling a final test after all cleaning is complete in four to six weeks. Gilliland said ERG plans on doubling all testing for the last round.

When testing the air quality, Young said his company first tests the outside air for mold counts, then compares the air in the building. The U.S. Environmental Protection Agency and Center for Disease Control “counts at or below what outside counts are” to deem what constitutes safe mold levels indoors, Young said. There is no state law or “hard number” for unsafe mold levels in a building, Young said.

“Your school is in great shape compared to outside air,” he said.

On the initial testing of the lunchroom Sept. 22, outside air counts reached 100,000 per cubic meter of air, while inside the lunchroom tested at 3,400 mold spore count, according to Young.

On Nov. 14, the outside spore count was 9,300, while the lunchroom read 210 spore count per cubic meter of air. The predominant mold detected was mushroom mold spores, Young said.

The most recent air testing was Nov. 26, when Young said “everything is normal.”

Young also said only 5 to 8 percent of the general population is allergic to mold.

“The Shelby County Board of Education has been extremely proactive in this issue,” Young said. “I can assure you Shelby County does not want to put any child in harm’s way.”

Fuller said he plans to write another letter to parents when the testing is complete to explain the findings. He may also call a meeting with parents.

“To ensure transparency, we want everyone to know we’re working very hard to provide a safe environment for our kids,” Fuller said. “We try to do what’s best for our kids.”

The Pelham City Council likely will discuss a project aimed at bringing a new tenant to the former Moore-Handley building... read more