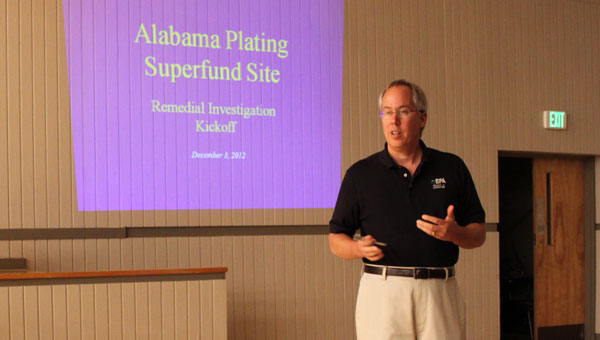 VINCENT – A representative from the U.S. Environment Protection Agency told about 40 Vincent residents the agency would begin a remedial investigation of the Alabama Plating Superfund site starting Jan. 14, 2013.

The site, which is located at the corner of U.S. 231 and Shelby County 60 and encompasses six acres, was the location of a plating operation from 1956 to 1996.  Alabama Department of Environmental Management shut down the site due to permit violations, EPA Project Manager Scott Miller said during a public meeting with Vincent residents on Dec. 3.

The facility was proposed for listing to the National Priorities List in August 2000, and was placed on the list in September 2012.

The operation generated waste containing zinc, cadmium, copper, lead and other heavy metals into the soil.

For two years, the EPA has conducted monthly studies to test the spring-fed municipal well, which provides the city’s drinking water, and Miller said there was “no connectivity between the site and the spring.”

The purpose of the remedial investigation is to determine what types of technologies will be necessary to extricate the remaining heavy metals from the area, Miller said, noting public meetings will be scheduled to keep residents informed of the results.

Both federal and state governments will be funding the project, Miller said.

Miller said the site clean up will take place in 2015 or 2016, which gives a “reasonable amount of time for pilot testing to see which technologies work.”

FROM STAFF REPORTS VINCENT – Vincent Elementary is hosting a Parenting Night at 6 p.m. Oct. 25 at the school.... read more