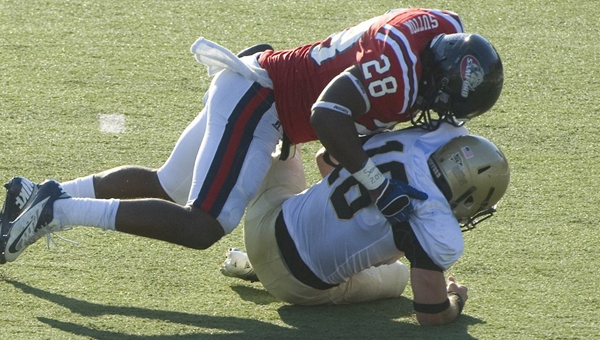 BIRMINGHAM —Samford senior linebacker Darion Sutton was named the Southern Conference’s Defensive Player of the Month for football when the league released its monthly awards on Wednesday, Dec. 5.

Sutton, a graduate of Shelby County High School, led the Bulldogs with 26 tackles (14 solo) in November, helping the squad to a 2-1 record with a win over No. 6 Wofford. The Columbiana native had four tackles for loss, totaling 15 yards, and had one sack for five yards. Sutton also forced a fumble and recovered a fumble in the month.

Perhaps his best game of the month was against FBS opponent Kentucky on Nov. 17, when he had a team-best 11 tackles (two for loss) and forced a fumble. He also recovered a fumble and returned it five yards in a win over Elon on Nov. 10.

The Oak Mountain Eagles held Pell City without a field goal in the fourth quarter to secure a 43-35 victory... read more