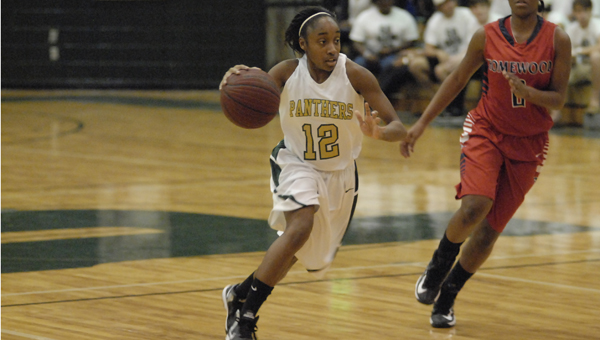 Pelham's Erykah Hall looks for a teammate under the basket in the Lady Panthers' 42-23 loss to Homewood Dec. 4. (Reporter photo/Mickel Ponthieux)

PELHAM – The Pelham Lady Panthers were unable to overcome a poor shooting performance to fall 42-23 at home to the Homewood Patriots Dec. 4.

Pelham fell behind 8-0 early before Zarria Morgan scored the lone Lady Panther field goal of the quarter for an 8-3 score after the first quarter of play.

Homewood distanced themselves to start the second with an 8-0 run to take a 17-3 lead.

Autumn Wilde led Pelham scoring five of the Lady Panthers’ 10 points in the period for a 24-13 halftime score.

Bradleigh Smith and Wilde scored back-to-back field goals to start the second half, but the Patriots closed the third quarter on an 8-0 run for a 32-17 advantage heading into the final eight minutes of play.

Homewood held Pelham without a field goal in the fourth quarter, but the Lady Panthers were 6-for-11 from the free throw line.

Kiara Williams led all scorers with 21 points for Homewood.