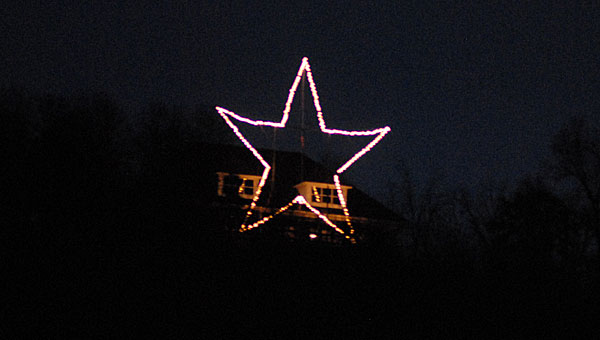 Chris House has been displaying a large lighted star at his Pelham home since 1998. (Reporter Photo/Neal Wagner)

Several weeks before Christmas each year, a symbol appears over Pelham harkening back to the holiday’s biblical origins.

For the past 14 years, Chris House has hoisted enormous lighted stars on the back of his house on top of Oak Mountain near Pelham’s eastern boundaries. What started as a relatively small 10-foot star in 1998 has grown to a mammoth 50-foot piece visible from Pelham and its neighboring cities.

House said he decided to start displaying the star to help spread the Christmas spirit, despite his remote location atop the mountain.

“I’m in the east part of the city, and the original star (in the Bible) was in the east,” House said. “It kind of reminds you of the past, and serves as a symbol of hope.”

The star is constructed of several pieces attached to a lightweight aluminum frame hoisted onto a support resembling football field goal uprights. Once assembled and hoisted into place, the star contains more than 500 lights, and its pinnacle sits about 65 feet off the ground.

When not in use, the star breaks down small enough to store in House’s garage.

“For the most part, I put it up by myself every year,” House said. “It’s funny, I just get out there, turn on the Christmas music and put it up. It may be 10 o’clock at night, but I think it’s peaceful.”

Over the years, House has gotten many compliments on the star, and has become a holiday tradition in Pelham.

“I’m surprised by the number of people that know about it,” House said. “Some people tell me ‘It’s not Christmas until the star goes up.’”