Panthers fall at home to Patriots 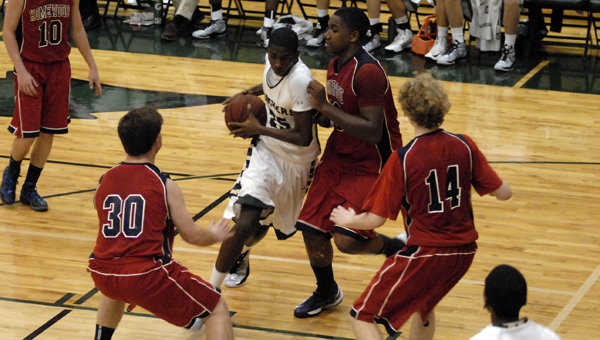 PELHAM – The Pelham Panthers were unable to find rhythm on offense in a 44-32 loss to the Homewood Patriots Dec. 4 at home.

The Panthers (3-3) opened the game with a scoring drought of nearly four minutes before Dakota Clark hit a field goal with 4:05 left in the first quarter. Willie Simpson hit a three from the right wing with under a minute remaining for a 12-5 Homewood lead headed into the second.

Justice Clark scored five of the Panthers’ seven points in the second quarter while the Patriots closed the half with a 14-2 run for a 29-12 advantage at the half.

Homewood extended its lead in the third to 20, but the Panthers answered with their best offensive outputs of the night. Pelham outscored the Patriots 14-6 in the fourth but was unable to overcome the deficit to fall 44-32.

Justin Brooks led Pelham with eight points, all coming in the second half. Simpson, Clark and Kenny Meadows each added five points.

Kelvin Bradford and Malik Cook each scored 13 points to lead all scorers for Homewood.

Pelham's Erykah Hall looks for a teammate under the basket in the Lady Panthers' 42-23 loss to Homewood Dec. 4.... read more