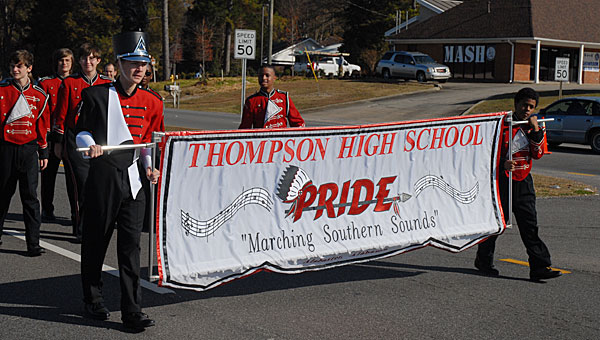 Thompson High School’s Marching Southern Sounds band is about one-third of the way through its fundraising goal for new uniforms, and is getting help from local businesses such as Dairy Queen and Belle Foods.

The band has been working for the past several months to raise about $70,000 to replace the organization’s current uniforms, some of which were purchased in the early 1990s, and has raised about $23,000 toward the goal so far.

THS Director of Bands Jon Bubbett previously said the band must put down a $35,000 deposit to order the new uniforms, and must pay the balance before the uniforms are delivered.

“We’ve been saying that the first half will be easier to raise than the second half. We’ve got to work to keep it going,” Bubbett said.

Several local organizations and individuals are helping the band to reach the $70,000 goal. The Alabaster Dairy Queen is running a fundraiser through Dec. 9, and is looking to raise $10,000 to donate to the band.

“We have seen first hand when other school systems have special needs (and) the community steps up and makes a difference,” said Alabaster Dairy Queen owner Aimee Komonce. “We want to personally make sure our community does the same and do right by our kids.”

On Saturday, Dec. 22, members of the THS band will also be bagging groceries and carrying them to cars at Alabaster’s Belle Foods store at 509 Highway 119 South. All money raised during the event will benefit the uniform fund.

To contribute to the uniform fundraiser, contact Bubbett at 682-5700.

Chris House has been displaying a large lighted star at his Pelham home since 1998. (Reporter Photo/Neal Wagner) By NEAL... read more