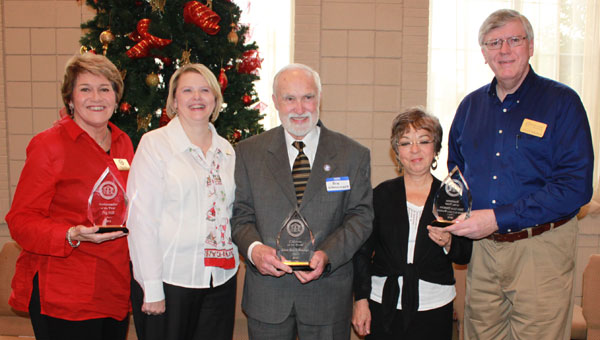 The South Shelby Chamber was founded in 1993, when concerned business leaders had an interest to strengthen the economy of the state’s fastest growing county, Atchison said.

The chamber was housed in Atchison’s Columbiana home for seven years until Columbiana resident Jeanette Niven passed away and willed her home to the city of Columbiana to be used for the chamber and other civic organizations.

“The chamber consists of business and professional people working together to build a better economy,” Atchison said.

During the luncheon, which was held at the United Methodist Church of Columbiana, state Sen. Slade Blackwell, R-Birmingham, presented a $5,000 check to the SSCC. 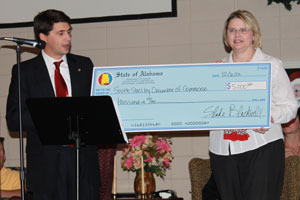 Dr. Ben Smith recognized the 2012 SSCC ambassadors, who are the “backbone of every event,” he said.

Columbiana Mayor Stancil Handley introduced the 2012-2013 Board of Directors, noting the board goes “above and beyond the call of duty to help the chamber grow.”

Peg Hill, a member of the Shelby County School Board, was awarded as Ambassador of the Year.

Make You New, which was founded by Andrea Lewis, was awarded as the New Business of the Year. The business promotes women to “discover their self worth and the purpose for which God created us,” Smelcer said.

New Leaf Design, which is owned by Chuck and Carla Watkins, was awarded as Business of the Year. 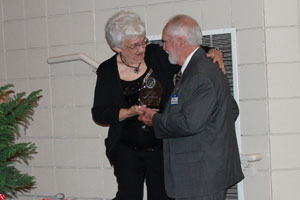 Chelsea resident Bob Wanninger was named Citizen of the Year.

Wanninger was “instrumental” in Chelsea’s incorporation, and continues to serve on several city boards. He also co-founded Chelsea’s museum and promotes the “avenue of flags” lining Chelsea’s U.S. 280 cooridor.

“What a surprise,” Wanninger said after accepting the award.

Proceeds of the luncheon went to Ministry House, a ministry of First Baptist Church of Alabaster.

Shelby Baptist gets ‘A’ for safety