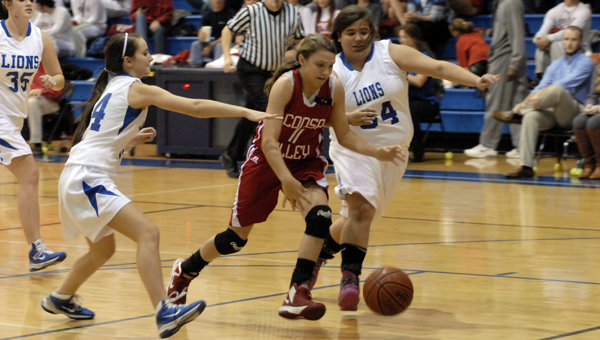 ALABASTER – The Coosa Valley Rebels girls’ basketball team went on a late run to take a 47-43 victory over the Kingwood Lady Lions Dec. 6.

“It was definitely a tough loss,” said Kingwood head coach Andrew Pearce. “We came to play, but we couldn’t finish it out.”

The Rebels (0-6) answered with a run of their own. Danielle Richardson and Kaylon Rich led Coosa Valley on a 6-0 run to regain the lead, 40-37 with three minutes left.

Back-to-back baskets by Katie Allen Etheridge gave Kingwood a one-point lead, 41-40. But that would be all the Lady Lions would be able to muster. Coosa Valley went on a 7-2 run in the final two minutes to take the 47-43 win.

“When they scored and (Kingwood) got ahead by one, we didn’t panic,” Rutledge said. “Danielle is only a 10th grader, but she knows basketball. We are going to get on her back and let her carry us.”

The Lady Lions jumped out to an early 5-0 lead, but Coosa Valley answered with an 8-0 run to grab a 8-7 lead after the first quarter.

The lead changed three times in the second quarter, but the score was even at 18 at the half.

Madelyn Pearce opened the second half with a three to give Kingwood a 21-18 lead. The Rebels went on an 10-2 rally to grab a 28-23 lead midway through the third.

Blair Holsembeck and Pearce hit back-to-back 3-pointers to close an 8-2 rally for a one-point Rebel lead headed into the fourth.

Richardson led all scorers with 24 points for Coosa Valley along with five steals. Rich finished with 13 points and 17 rebounds in a double-double performance. Kayla Shaw had 10 rebounds.

Kingwood's Josh Purvis puts up a shot for two of his game-high 16 points in the Lions' 68-30 victory over... read more