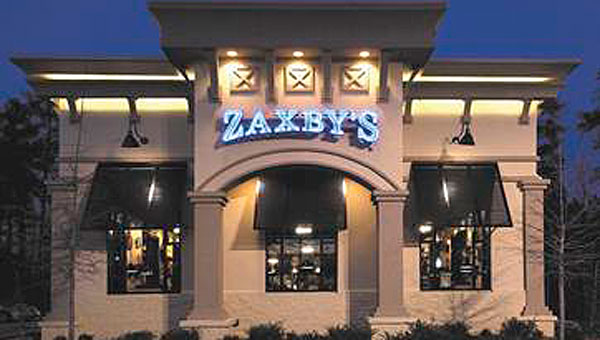 The Helena Zaxby's restaurant is preparing to open its newest store on Coalmont Road on Dec. 10. (Contributed)

The new restaurant is located at 30 Coalmont Road, across from the Publix supermarket, and will operate from 10:30 a.m. to 10 p.m. every day.

Helena Mayor Mark Hall said he was excited about the new restaurant, and said it will help bolster the city’s tax base.

“We think it will be a good fit. They’ve really gone above and beyond with the design of the building,” Hall said. “It will bring a new wave of tax revenue that is much-needed.”

Pate and Mason also own three Zaxby’s locations in Hoover, and one each in Birmingham, Pelham and Calera.

“We’ve always wanted to bring a Zaxby’s to this area of Shelby County,” Pate wrote in a press release. “We’re excited to be a part of the community and are confident that the same quality of food and service Zaxby’s is known for will keep area residents coming back for more.”

“We’ve assembled a great group of team members who will deliver on the Zaxby’s mission to ‘consistently create encore experiences that enrich lives, one person at a time,’” said Mason.

The new location will be the seventh in Shelby County, and the 64th in Alabama. Zaxby’s currently operates more than 560 locations in 13 states.

Zaxby’s offers prepared-at-order chicken fingers, wings, sandwiches and salads. Zaxby’s most popular items are its hand-breaded “chicken fingerz” and jumbo buffalo wings, smothered in a choice of nine sauces with names such as wWimpy, Tongue Torch, Nuclear and Insane.

The menu also offers “Zappetizers” such as tater chips, spicy fried mushrooms and fried white cheddar bites, as well as a variety of “party platterz.”

Zaxby’s also offers a variety of salads, milkshakes and other menu items.

This is one of the paintings Annabelle DeCamillis submitted to the YoungArts program. (Contributed) By AMY JONES / Associate Editor... read more