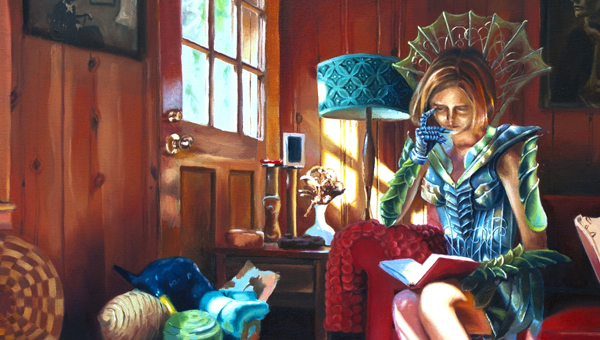 This is one of the paintings Annabelle DeCamillis submitted to the YoungArts program. (Contributed)

HOOVER — A Spain Park High School senior will rub shoulders with today’s artistic living legends after being chosen from 10,000 applicants to attend the YoungArts convention in Miami.

Annabelle DeCamillis, who focuses on oil painting, was one of 15 students chosen in the visual arts. She will travel to Miami Jan. 8 and spend a week learning from master teachers in her medium.

“When I applied, I didn’t really know what I was applying for — I just knew it was a big deal,” DeCamillis said. “I didn’t even know I’d go to Miami. I am very excited about the master workshops.”

DeCamillis said when she applied for YoungArts, she turned in a series of oil paintings she’s done that portray people in costumes doing menial, everyday tasks.

“I love to draw people. They’re just so complicated,” she said. “They really are the hardest things to draw. Anyone can look at a portrait and see what’s wrong with it.”

She said her inspiration for the series came from another passion — making costumes.

“I’ve gone to a few costume conventions, and I love watching people in these crazy costumes eating McDonald’s,” she said. “That’s where the inspiration came from.” 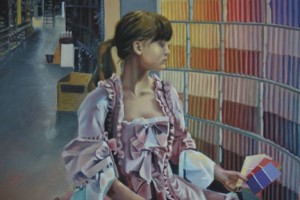 This is "Rococo Renovation," one of Annabelle's best-known paintings. (Contributed)

One of her best-known paintings, “Rococo Renovation,” portrays a girl in an old-fashioned dress looking at paint samples in a home improvement store. That painting won her a national Scholastic Art and Writing Gold Medal Award earlier this year and helped her win a place in YoungArts.

“When I was little, I would go with my parents to Home Depot and it would be hours, so I would spend my time in the paint section, picking out paints,” she said. “They would only let me take about five home, so I would spend forever picking them out.”

DeCamillis plans to attend art school next year, and hopes to go to the Pennsylvania Academy of Fine Arts.

“That’s pretty much my dream school,” she said. “I’m pretty advanced in realism, and I really want to find a school that can push me in realism, because so many art schools now don’t. That’s one of the few schools that focuses on realism.”

Some of the student artists at YoungArts may be featured on the HBO series “YoungArts Master Class.” YoungArts participants are also eligible for scholarships of up to $10,000 and will be considered for the U.S. Presidential Scholars in the Arts.

Each year, 20 YoungArts winners are chosen as U.S. Presidential Scholars in the Arts and showcase their work at the John F. Kennedy Center for the Performing Arts and at the Smithsonian American Art Museum in Washington D.C. Those winners are also given their awards at a White House ceremony.

Chandler Hoffman waits for a Riverchase Elementary student to take a shot on the goal. (Reporter photo/Amy Jones) By AMY... read more