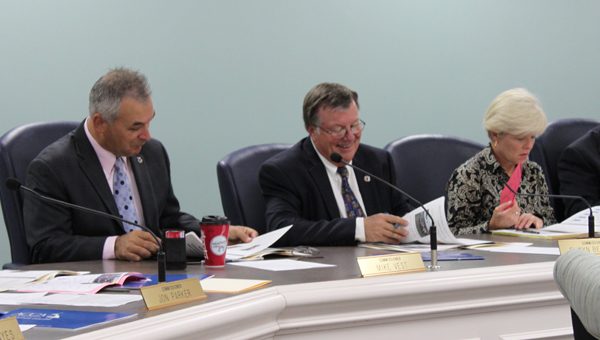 COLUMBIANA – The County Commissioners settled into their new roles as Commissioner Lindsey Allison moved to the chairperson’s seat, new commissioners Mike Vest and Elwyn Bearden found their places and the commission approved all committee appointments and assignments during the Dec. 10 meeting.

Cindy Hawkins, director of Kids First Awareness in Alabaster, thanked the commission for its support during the public comment section. Hawkins passed out a report to the commissioners showing photos from the past year, testimonies from kids and statistics and goals.

Hawkins referenced the freestanding trailer the commission donated to Kids First in January, which the program named “Shelby County: ALEX” in honor of the commission and County Manager Alex Dudchock.

“We can’t come over here and do a lot of things, but we can always keep you in our prayers,” Hawkins told the commission.

Dudchock presented a franchise agreement to the commission between the county and Bright House Network. Bright House requested a cable franchise agreement contract for The Oaks at Greystone Apartments, a 200-unit apartment complex that is under construction located in unincorporated Shelby County on Cahaba Valley Road. The agreement will only affect the parcel of land with the apartments and no other locations in unincorporated Shelby County.

Dudchock said he would present a recommendation to the commission during the next meeting, Dec. 26.

During the meeting, the commission:

–Awarded the bid for replacing the Shelby County Courthouse roof to Midwest Commercial Roofers for $139,270.

–Awarded the bid for Granular Activated Carbon Reaction to Calgon Carbon for $174,696.

–Awarded the bid for jail kitchen equipment and supplies to EcoLab.

–Implemented a voter file maintenance process for the Shelby County Board of Registrars. The commission will pay the cost of postage necessary to mail notices to voters and will apply for reimbursement from the State of Alabama through the Alabama Secretary of State’s office.

–Announced the Vandiver-Sterrett Senior Center dedication is set tentatively for Jan. 25 at 11:30 a.m.