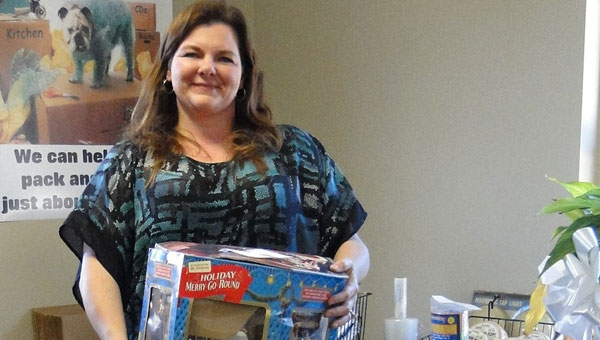 Businesses often reduce prices, but rarely do they give merchandise away. Lovelady Mini Storage is giving items away on Facebook through a program called Storage Scores.

“We use to throw away items left in the units,” Polk said. “Scott and I talked about it and decided to give them away on Facebook. I post the items, Facebookers subscribed to our page scroll through them and the first to post mine in the comment box wins. Some items are available only to our customers in appreciation for their loyalty and patronage.”

Items given away the first week included a lead crystal bowl, new, in-the-box Timberline boots, wall art, musical carousel, portable grill and baby items. In addition to giveaways, there are auctions for more valuable merchandise with all proceeds given to charity. The first week’s auction proceeds went to Herobox.org.

Owner Scott Lovelady saw an increase in self-storage with the downturn in the economy several years ago. He said it’s not uncommon for people to abandon a whole unit.

“You don’t know what goes on in people’s lives,” Lovelady said. “They may go through a divorce and don’t want what’s in it or reminded of it. Some people stop making payments because they can’t afford it. We work with them to keep their things.”

By law, abandoned units can be auctioned. Lovelady said the hardest thing when he opened his first self-storage facility in 1997 was abandoned family photos. He collected them and contacted the renter to pick them up at no charge. Surprisingly, some were never picked up.

Lovelady owns 915 standard and temperature controlled storage units in Calera, Montevallo and Alabaster. They are leased monthly and range in size from 5-feet-by-10-feet’ to ten-feet-by-45-feet. Currently the third, sixth and ninth months are free at the Calera location. Penske moving trucks are available for rental, call 668-6291 M-F 8:30 a.m-5 p.m. and Saturday 8:30 a.m.-4 p.m. for truck rental and storage rates. Visit them online at Loveladyministorage.com for coupons and specials.