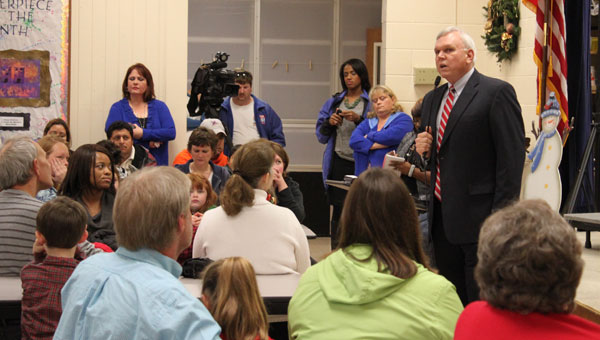 Superintendent Randy Fuller said he wanted to rebuild the trust of the MES parents during the Shelby County Board of Education meeting at MES Dec. 10. (Reporter photo/Christine Boatwright)

MONTEVALLO – More than 100 concerned Montevallo Elementary parents attended a specially called meeting by the Shelby County Board of Education Dec. 10 to hear school leadership discuss the mold issue at their children’s school.

Fuller said the purpose of the meeting was to share information with the parents and to “rebuild trust in the central office.”

After more than two hours, however, parents continued to question the truthfulness of the superintendent, the air quality tests and any efforts to maintain the cleanliness of the school.

The mold issue was addressed first in September, and when heightened counts of mold were found in at least one other additional classroom, the school system hired ServPro and KNS Done Right cleaning companies to clean the school.

Fuller said MES will be “one of the cleanest schools in Shelby County” after cleaning is completed.

“To give you peace of mind, we’re giving room by room tests,” Fuller said. “We’ll have the results in the next few days.”

Carla Layton, special education program specialist with Shelby County Schools, said she lives in Alabaster, but chooses to send her fifth-grader and ninth-grader to Montevallo schools.

“(The cleaning) is a process that’s not going to happen overnight,” she said.

Fuller said plans for renovation projects in Montevallo schools are in development and will be released in the “next few months.” There is no plan for a new school in Montevallo, however, as the area is not growing as rapidly as other areas of the county.

When asked if the meeting helped rebuild the trust between MES parents and the school system, PTO President Michele Gallagher replied, “No.”

“They never provide evidence. How long does it take to get paperwork you already have? It shouldn’t take four weeks,” she said.

As tempers began to flare, Mayor Hollie Cost, who has a fifth-grader at MES, said she has not kept her son home from school because of mold, but she is concerned about the condition of the school.

Cost said she was not invited to the meeting, but learned of it from a notice sent home with her son.

Cost encouraged residents to band together and be patient, as school system leadership was “showing how hard they’re going to work.”

Cost said Dec. 10 was her first day back from sick leave, wherein she was recovering from a double mastectomy due to breast cancer, to attend the meeting.

“I care about the school, and I trust the school district,” Cost said.

A handful of vocal parents asked for a second opinion concerning the air quality testing, as ERG Environmental has a contract with the school system.

Amberli Lucas, a young mother of two MES students, said her 8-year-old son lays on his bed and cries after school due to migraines. This is Lucas’ son’s first year at MES, and he went from two migraines a month to five a week, Lucas said.

“I’m a mother, and I’m supposed to protect my son,” Lucas said to Fuller. “We deserve the truth, and you’re covering it up.”

“To the best of our knowledge, we’ve told the truth,” Fuller said.