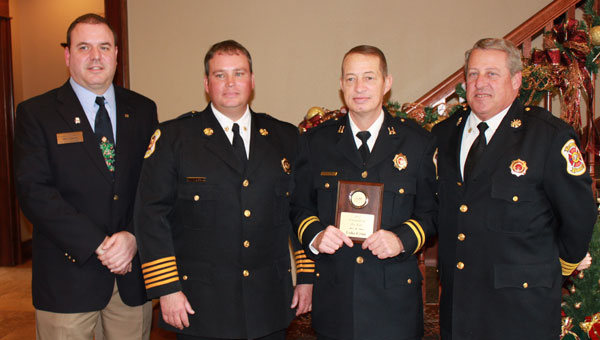 CALERA – The Calera Chamber of Commerce doled out myriad awards during the Dec. 11 luncheon at Timberline Golf Club.

For the second year, the chamber recognized the Calera Chamber Fire Fighter of the Year and Police Officer of the Year.

Fire Chief Sean Kendrick said he was “so proud” to award Shift Captain Luke Crim with the title.

Kendrick said Crim has served with the Calera Fire Department for 30 years. The department was a volunteer department until about 12 years ago, so Crim served almost 20 years as a volunteer.

Crim typically remains the yard at a house fire and takes a leadership position from outside the fire. Kendrick said during one fire, he arrived at the scene and tapped Crim on the shoulder to take over command. Crim, a “senior member of the department,” according to Kendrick, immediately strapped on equipment and headed into the fire. 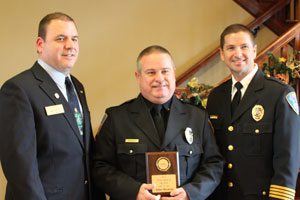 Police Chief Sean Lemley thanked the chamber for recognizing the police and fire department members on a local level.

Officer John Shearon was named Police Officer of the Year, and he was nominated by his supervisors, Lemley said. Shearon joined the department in 2008 after working at the Chilton County Sheriff’s Department.

Shearon is “a supervisor’s model of what an officer should be,” as well as self-sacrificing, Lemley said.

“John is always the first to step forward when volunteers are requested, even with others are stepping back,” Lemleys said.

Crim and Shearon’s names were added to a plaque displayed in City Hall.

“I really appreciate the jobs each of your departments do. We have the best,” Mayor Jon Graham said.

The chamber also announced the winners of the Calera Christmas parade, which was held Dec. 8.

David Comer of Central State Bank was welcomed as the new chamber president. Comer said he has “big shoes to fill” as he takes over the position from Bill Davis.

Blankenship announced the chamber’s Angel Tree contributions will conclude Dec. 14. Last year, the chamber was able to donate $1,000 to Calera’s three schools, but with the addition of Calera Middle School, the chamber hopes to donate the same amount to all four schools.