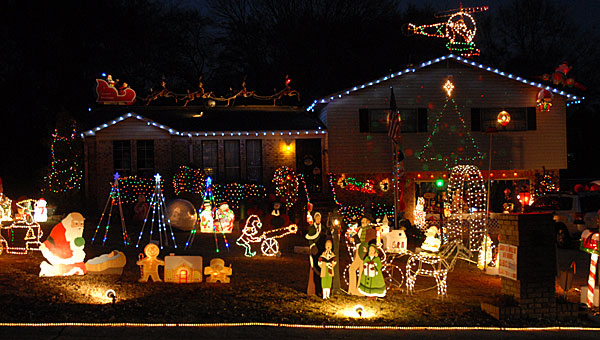 Jim Phillips' house on David Drive in Pelham is surrounded by thousands of Christmas lights and displays. (Reporter Photo/Neal Wagner)

Santa Claus will make a pit stop in a Pelham neighborhood a few days before Christmas to greet kids at one of the most-decorated houses in the area.

Santa will land his sleigh atop Jim Phillips’ house from 6-8:30 p.m. on Saturday, Dec. 22, and will greet kids as they tour Phillips’ yard and driveway full of holiday decorations of all kinds.

The visit will mark the continuation of a longtime annual Christmas tradition for Phillips. Every year, Phillips covers his yard on David Drive off Bearden Road from end to end with decorations ranging from figurines to blow-up snow globes and nativity scenes. The centerpieces of the setup are the sleigh on his roof, which was displayed for many years on Birmingham’s City Federal building, and a life-size Santa Claus in the house’s front window – one of the 200 original Coca-Cola Santas.

“I’ve been pulling out all kinds of stuff I got last year and forgot about,” Phillips said with a laugh.

Although Phillips will keep his displays lit during the weeks leading up to Christmas, his main event will come on Dec. 22, during which Santa will take his seat in the sleigh atop the house from 6-8:30 p.m. During Santa’s visit, a snow machine will transform Phillips’ yard into a winter wonderland, and Santa’s helpers will hand out candy to children.

Santa’s visit typically draws thousands of visitors – some from out of state – to view one of the most decorated streets in Shelby County.

“I think it will be swamped this year,” Phillips said. “I think more of the neighborhood has decorated this year, so it’s looking really good.”

By NEAL WAGNER / City Editor The Alabaster Board of Education announced it will not change employees’ pay rates and benefits... read more