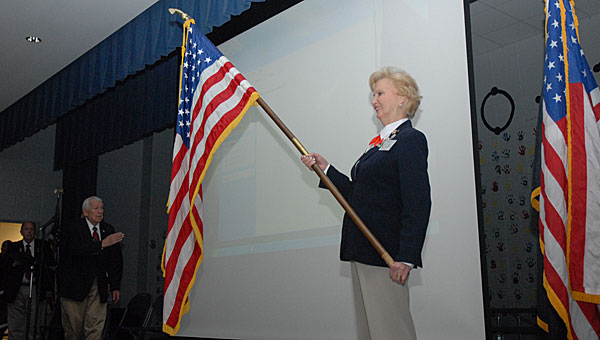 Students at Alabaster’s Meadow View Elementary School got a look at the history of the Star Spangled Banner while getting a gift to help them in their studies during a Dec. 12 assembly.

MVES students packed the school’s auditorium as members of the Pelham-based Cahaba Valley Elks Lodge explained the progression of America’s most visible symbol and told the kids about the Elks Lodge’s services.

“We not only love students, we love teachers, our community, Shelby County and our country,” Cahaba Valley Elks Lodge member Tom Davidson told the students. “Every day of your life you owe to your teachers, your parents and the people who help guide you through life. Don’t be ashamed to tell them you love them.”

Davidson explained the Elks Lodge’s annual fifth-grade patriotic essay contest, in which the lodge awards scholarships for the best essays in the county, and encouraged the kids to take part in the contest when they are old enough.

Davidson also told the students to stay away from illegal drugs, tobacco and alcohol, and encouraged them to participate in the lodge’s annual basketball hoop-shooting contest, which will be held at Helena Middle School in late January.

When Elks Lodge member Carol Shubert presented the 50-star American flag, the kids stood and saluted as the Elks Lodge members played a recording of a 7-year-old singing the national anthem.

After the flag presentation, the Elks Lodge members handed out hundreds of dictionaries containing anti-drug bookmarks to the kids.

“We hope that in a few years that this dictionary will be worn out,” Davidson said.

This is one of the paintings Annabelle DeCamillis submitted to the YoungArts program. (Contributed) By AMY JONES / Associate Editor... read more