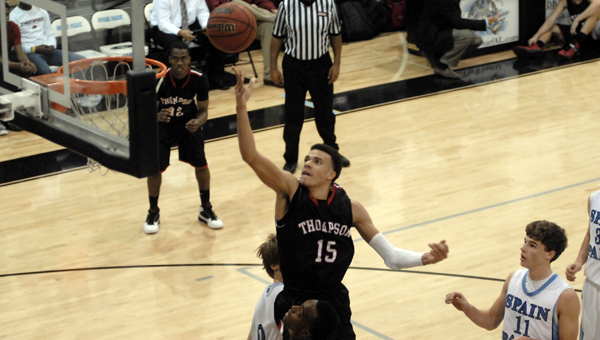 Thompson's Caleb Johnson goes up for a layup in the Warriors' 55-48 win over Spain Park Dec. 11. (Reporter photo/Mickel Ponthieux)

HOOVER – The Spain Park Jaguars rallied from an 11-point halftime deficit to take the lead in the fourth quarter, but the Thompson Warriors responded for a 55-48 road victory Dec. 11.

The Jaguars (4-8) trailed 35-24 after the first half, but went on a 9-0 run midway through the third quarter to pull within four, 39-35. Austin Jones knocked down a 3-pointer from the top of the arch for a 41-38 Thompson lead headed into the fourth.

Deion Wright led the Jags on a 6-2 run to start the final quarter to tie the game 43-43 with five minutes remaining. Jonathan Toups scored three unanswered points to give Spain Park a 46-45 lead with 2:54 remaining.

“I thought we did a good job bouncing right back,” said Thompson head coach Patrick Davis. “It’s good to handle a little bit of adversity in losing a lead like that. (Spain Park) is very scrappy and can defend. To lose a favorably sizable lead and to get it right back says a lot about our kids.”

Thompson took a 20-16 lead in the first quarter and extended the advantage with a 10-2 lead in the second for a 35-20 edge with under three minutes remaining in the half.

Jones led Spain Park with 12 points. Wright and Jonathan Troulias each scored 10 points for the Jags.

Rashad Strother led all scorers with 15 points for Thompson. Marcus Lewis and DeAndre Gamble each scored 11 points. Duke Thomas finished the game with a double-double scoring 10 points and 12 rebounds.

Spain Park will return to action on Dec. 14 at home against Homewood.

The Warriors will host Oak Mountain Dec. 14 and will be raising money for autism awareness. Thompson and Oak Mountain are selling autism awareness t-shirts and are available at both schools for $10. Proceeds from t-shirt sells and donations at the game will benefit Mitchell’s Place in Birmingham.

Spain Park's Victoria Baldwin has a shot blocked by Thompson's Miyel Miller in the first half of the Lady Jags'... read more