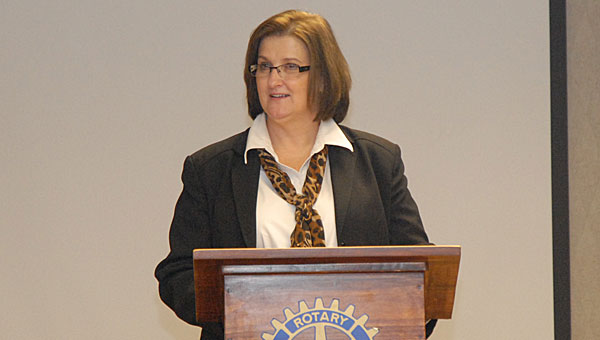 The Alabaster-based Day Program works to provide hope and support for kids who have been struggling in local schools, the program’s executive director told the Alabaster-Pelham Rotary Club during a Dec. 13 lunch.

During the lunch, Day Program Executive Director Kathy Miller said the program receives support from several entities, including Shelby County Schools, the Shelby County Commission and the Rotary Club, to help students who are having problems in local schools.

Most of the kids at the Day Program were referred to the program because they were disruptive in class, were having trouble coping with a school environment or had fallen behind on their academic work, Miller said.

“They have not had a good parenting model at home in many cases,” Miller said. “The saddest thing of all is that many of them have no hope. We try to give them hope first and support second.

“These kids are begging for someone to care about them,” Miller added.

The program is licensed to serve 60 students between the ages of 13-18 at a time, and serves mostly middle school-aged kids.

Through the Day Program, staff members focus on math, science, English and history in an effort to help the kids catch up in their academic work and one day graduate from a Shelby County school.

“Many of the kids are not able to handle anger at all, and most do not have a good moral compass,” Miller said.

Over the years, the Day Program has helped hundreds of struggling students to find success and eventually graduate from high school.

The program currently operates out of a 90-year-old former doctor’s office near the Alabaster Senior Center, and is preparing to move to its new location on the second floor of the Alabaster YMCA’s new wing.

“I believe that in the new facility, we will be even more successful,” Miller said.