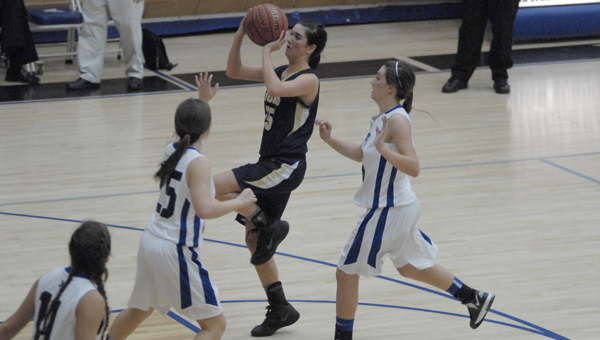 Briarwood's Hannah Wainwright shoots for two of her 16 points in the Lions 45-30 victory over Chelsea Dec. 14. (Reporter photo/Mickel Ponthieux)

Briarwood took a 10-5 lead in the first quarter and never let the lead go.

Chelsea pulled within three 17-14 when Courtney Campbell hit a three from the left wing with under three minutes left in the first half. Amanda Mock added a basket in the last minute to pull the Lady Hornets within one, but Briarwood’s Jessye Bullock hit a three to give the Lions a 20-14 lead at the half.

Briarwood opened the second half with a 7-0 run to take a 36-20 lead into the fourth quarter.

The Lady Hornets outscored the Lions 10-9 in the final eight minutes, but it wasn’t enough as Briarwood took the 45-30 win.