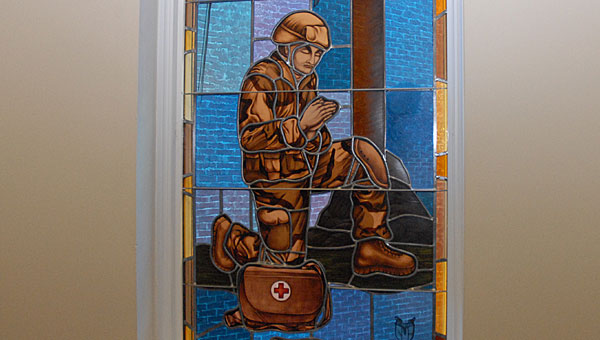 Pelham native and U.S. Army 2nd Lt. Matthew Blount will forever be memorialized at Pelham First Baptist Church after family members, friends and church officials unveiled a stained-glass window in his honor during a Dec. 15 ceremony.

Blount, a Pelham High School graduate who served in the Army for 13 years as a combat medic and on a mortar platoon in Iraq, passed away March 10 after a lengthy battle with cancer and leukemia.

After a dedication service in the church’s sanctuary on Dec. 15, dozens of Blount’s friends and family members got a chance to see the window, which depicts a soldier praying at the foot of a cross and was installed in an outside hallway surrounding the sanctuary.

During the dedication service, retired Maj. Gen. James Darden said Blount was “exemplary of what a soldier should be,” and said Blount touched many lives during his time on Earth.

“There is no other place I’d rather be than right here this morning,” Darden said. “We have been blessed by Second Lieutenant Blount. I think he is in a better place now.”

Col. Cornelius Easter said Blount was “like a son” to him, and called Blount a “consummate soldier.”

“Matt was caring, giving and a servant soldier. He was ahead of his years,” Easter said. “He left legacies everywhere he went.

Next Step collecting for family in need

By NEAL WAGNER / City Editor The employees at Alabaster’s Next Step Prosthetics typically have an idea of who they will... read more