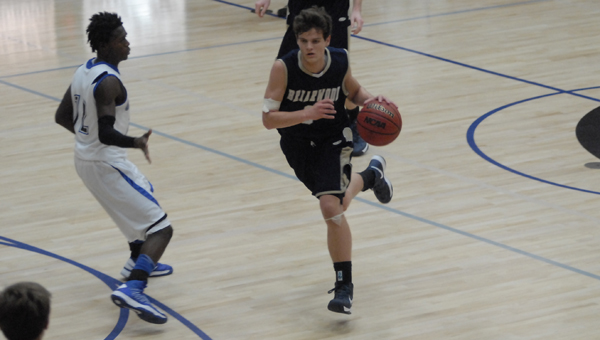 CHELSEA – The Briarwood Lions withstood a hot start by the Chelsea Hornets in the first half to claim a 62-59 victory Dec. 14.

“We dug ourselves such a hole,” said Briarwood head coach Chris Laatsch on the first half. “They shot it great and moved the ball in transition great. Our kids really fought and battled. We told them we just have to cut a point every minute from the 17-18 point deficit to try to catch them at the end.”

The Lions (5-5) began to claw their way back in the second half. Briarwood turned up the heat on defense forcing turnovers while limiting the Hornets’ chances on defense. Briarwood went on a 7-0 run midway through the third quarter to cut the deficit to 12, then closed the quarter scoring five unanswered points to trail 50-41 headed into the fourth.

Chelsea’s Malik Abrams extended the Hornet lead to 10 twice to start the fourth quarter before Briarwood began to chip away in the last four minutes. The Lions went on a 11-0 run to take a 58-57 lead with two minutes left on the clock.

Once Briarwood took the lead, they never let it go. Josh Laatsch and Justin Brown went a combined 4-for-4 from the free throw line in the last minute to seal the win.

“I was proud of our free throws,” said Laatsch. “Justin Brown, our freshman, was 8-for-8 from the line. (We) made big plays down the stretch to win.”

Chelsea had a few chances to send the game into overtime in the last 15 seconds, but none hit the mark for the Hornets.

Abrams led all scorers with 24 points for Chelsea. Austin Washington added 10 points for the Hornets.

Laatsch and Brown each scored 17 points to lead the Lions. William Lathem added 13 points and David Loveless finished with 10 points for Briarwood.