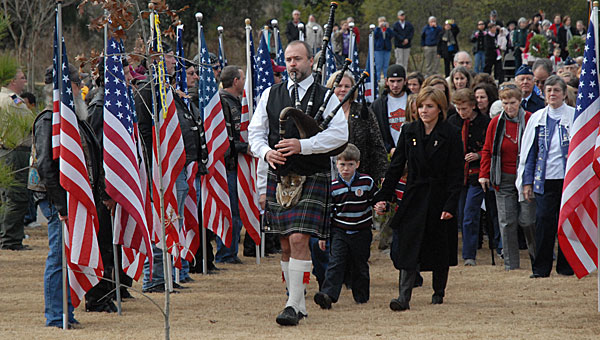 Trent Bradford plays "Amazing Grace" on his bagpipe as he leads family members of soldiers buried at the Alabama National Cemetery to place wreaths on their graves during a Dec. 15 ceremony. (Reporter Photo/Neal Wagner)

MONTEVALLO – Hundreds of friends and family members ensured every soldier buried at the Alabama National Cemetery in Montevallo will be remembered this Christmas as they worked to lay wreaths on every grave and memorial during a Dec. 15 ceremony.

During the event, which was the fourth Wreaths Across America event held at the cemetery, the Blue Star Salute Foundation of Alabama provided more than 1,700 evergreen wreaths to be laid throughout the cemetery.

Once the wreaths are laid out, they will remain until Jan. 22, said Alabama National Cemetery Support Committee Chairman Bob Barefield.

“This event is to honor those who are still serving, remember those who are buried here and to teach the youth that freedom is not free,” Barefield said. “We have a lot of youth here today from Boy Scouts, Cub Scouts and Brownies who are helping to lay the wreaths out.”

The event was one of hundreds of Wreaths Across America events held across the nation leading up to the Christmas holiday. The Wreaths Across America organization was founded in 1992 to provide wreaths for a section of Arlington National Cemetery not visited as frequently as other parts of the cemetery, Barefield said.

At the end of the ceremony, Trent Bradford, a member of the Alabama Pipes and Drums band, played “Amazing Grace” as he led family members of soldiers buried at the cemetery through a walkway lined with American flags to pick up wreaths and place them on their family members’ graves.

In addition to the Blue Star Salute, the Civil Air Patrol also co-sponsored the event.

Throughout the year, the Blue Star Salute works to raise money to purchase the more than 1,700 wreaths, which are $15 apiece.

“Many who donated wreaths did so in honor of loved ones,” said Support Committee Second Vice Chairman Peggy Bourland. “As you lay your wreath, I encourage you to write down their information and research their life when you get home.”