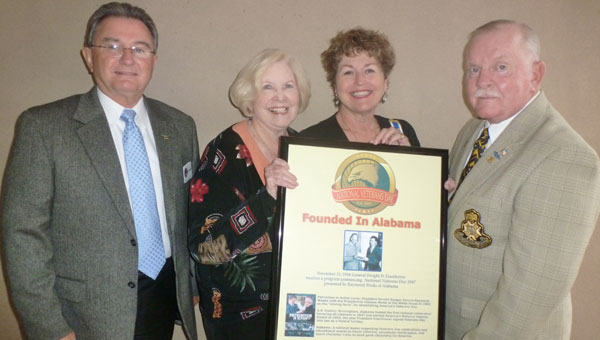 Far away from home this Christmas is the Alabama Army National Guard 167th Infantry Battalion Company B on active duty in Afghanistan, a medical unit primarily from Shelby County.

Thanks to the generous spirit of many, each soldier will receive a Christmas gift due to the leadership of Monica Malone, wife of Sgt. Jeffrey Malone, and DAR member Lucy Carpenter, both of Pelham.

Lucy Carpenter is a member of the DAR David Lindsay Chapter of Shelby County and has a lifelong connection to the military. Her DAR American Revolution ancestor was Lt. Col. William Farr, who was second in command at the Battle of Cowpen, S.C.

Carpenter graduated from high school living with her aunt and uncle on Scott Air Force Base, Ill. Her uncle, Master Sgt. Howard Lisey, was a World War II Army veteran who served in the Battle of the Bulge and later joined the Air Force.

For many years, Carpenter has chaired the yearly Christmas donations of her DAR chapter to the military since her son served in Iraq.

This year, the chapter expanded their giving, committing that all members of the 167th receive a Christmas present and joined forces with Malone.

With the additional support of the spouses of the 167th, the Alabaster and Pelham seniors, the after-school children’s YMCA program at Alabaster and Pelham and local Girl Scout troops, all 125 soldiers will receive a personal box branded with 167th Bravo Co. filled with candy, games, toiletries, etc., worth more than $2,500.

Donations were made by all to cover the postage, so the entire shipment has been paid for.

Merry Christmas to the soldiers of the 167th! You may be gone from home this Christmas but you are not forgotten in our hearts and prayers.

By PHOEBE DONALD ROBINSON / Community Columnist Sometimes the stars are in alignment, and all is right in the world.... read more