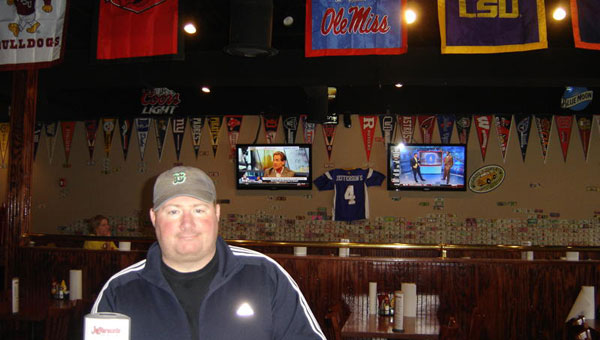 Jason Bush, owner of Jefferson’s on Valleydale Road, stands at a high-top table in the family-friendly sports restaurant where college banners hang from the rafters. (Contributed)

This month celebrates the second anniversary of Jefferson’s opening on Valleydale Road just east of I-65 in the center with Faulkner State.

Owner Jason Bush is very proud of his facility and calls it a “sports theme restaurant with a family flair.”

This location is one of 18 locations currently operating in five states. The organization continues to grow and has deep Alabama roots. Its humble beginnings go back to 1991 in Jacksonville, when Jeff Webb, a Jacksonville State University student, decided to get into the restaurant business. He felt qualified since he knew a little about hot wings and a little about beer. He had a significant baseball card collection, which brought him enough money to get the financing he needed to open the first Jefferson’s.

Jefferson’s menu defines their corporate vision: “We strive to be a family friendly sports restaurant with award winning wings, huge juicy burgers, fresh Gulf oysters and crisp salads. We feel it is important to serve quality food at a quality price.”

One thing Jason is proud of in his Valleydale location is the “neighborhood feel” of the place. A base for Jacksonville State alumni in the Birmingham area has also blossomed into a gathering place for some from Mississippi State and even Michigan State. Local schools and businesses have used the private party room for special occasions. This party room is complete with its own bar and the same taps found in the main room and accommodates up to 60 people.

Jefferson’s has daily food specials and beer specials on Thursday and Saturday. They try to schedule beer tastings from some of the premier breweries about once a quarter.

Jason said he’ll put his wings up against anybody’s. I have to tell you that after trying them, I’m on his side. Wings come in nine different styles or flavors. If you’re planning a holiday party and have not tried Jefferson’s wings yet, you might want to stop by and try some. Order your holiday party platters while there.