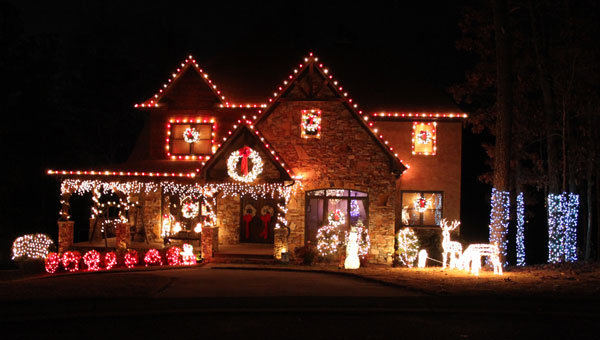 The Hollands decorate their Chelsea home with Christmas lights to light up their neighborhood last year. (Reporter photo/Christine Boatwright)

CHELSEA – Chelsea residents light up their neighborhood with myriad lights and Christmas decorations off Liberty Road.

Last year, Scott Grant began adding more Christmas lights to his house and noticed some of his neighbors doing the same. Jay Holland and Chris Smith’s homes are near Grant’s off Liberty Court and Liberty Lane.

“Most of the competition is in his head,” Holland said of Grant.

Grant said he added more lights to his display this year.

“My house looks like an Alabama score board after they score a touchdown,” Grant said, laughing.

The competition, however, has moved from neighborly banter to a more public stage. Grant works at Regions Bank’s corporate headquarters in downtown Birmingham. The Regions Bank Facebook page has two pictures featuring Grant and Smith’s respective Christmas lights and has asked Facebook users to vote for which house “deserves the top spot in their Holiday Hall of Fame.”

Smith’s house is pictured on top, and Grant’s is on the bottom. From the more than 30 comments, voters have chosen Grant’s house as worthy of the “top spot.”

“It’s not even close this year. Jay’s house looks really good this year, and so does Chris. He’s really upped his game this year,” Grant said. “To be honest with you, with more people in our neighborhood, we’ve been getting a lot of houses with a lot of lights. We have a really good neighborhood.”

Holland credits Grant with encouraging the neighbors to add more to their homes.

“I’ll give it to Scott,” he added. “It has made all the other houses in the neighborhood do a little more, which is a good thing.”

Grant and his three kids, all under the age of 10, plan to pass out candy canes from their house on Liberty Lane on Christmas Eve.

“I love my kids, but maybe they’ll learn a little bit about giving,” Grant said.

To see the festive lights, turn onto Liberty Road by Liberty Baptist Church off Shelby County 47. The competition takes place off Liberty Cove.

FROM STAFF REPORTS WESTOVER – The U.S. 280 westbound lane was reopened around 3:30 p.m. after an accident. At approximately... read more