After decade, half-completed hospital waits to be used 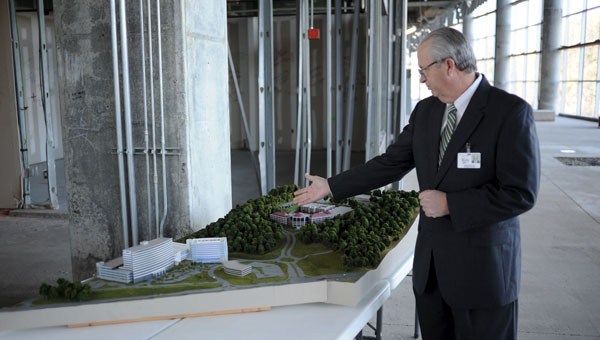 Trinity CEO Keith Granger shows off a model of what the U.S. 280 hospital would look like after completion. The model is on a table on the first floor of the hospital now. (Reporter photo/Jon Goering)

BIRMINGHAM — Right now, anyone who walks into the entrance of the unused HealthSouth building on U.S. 280 must imagine what could be on the first floor — an expansive lobby, with attendants at the ready to direct patients and visitors; a huge cafeteria, capable of serving thousands per day; and an air of bustling activity, with doctors, nurses and patients walking the halls.

Currently, the hospital stands as it’s stood for the past decade — full of state-of-the-art equipment on both finished and unfinished floors, waiting to be completed and used to serve patients from both Shelby and Jefferson counties.

For Keith Granger, CEO of Trinity Medical Center, the hospital is an asset that he and other Trinity officials have worked for four years to be allowed to use.

“This building was built to be a hospital,” he said. “Sitting here is an asset waiting to be used, and people are just driving by.”

The Daniel Corporation currently owns the building, but Trinity has a contract that will allow the medical center to take ownership of the hospital and the acreage around it once construction can move forward. Trinity and Daniel currently share the costs of keeping the building running.

Currently, five of the 12 floors are completed and are ready to be used. Finishing the rest of the hospital would mean a $280 million investment — far less than the $750 million Granger estimated it would take to construct a similar building from the ground up.

Although the hospital was built about 10 years ago, Granger said it would immediately become a “showplace” upon completion.

“One of the things that makes this kind of unique is that they had such great vision” while designing and constructing the hospital, Granger said. “Everything is vertically aligned.”

The hospital itself is contained within the current HealthSouth building, rather than in multiple buildings that will require walkways to be constructed, making it much easier for staff to move around and to move equipment.

Trinity plans to build a parking deck and an office building to house doctors’ private practices adjacent to the hospital. Those would open simultaneously with the hospital. Once construction starts, it will take about 24 months to complete all three projects, Granger said.

“The products used to complete this building were not standard products. They went first class,” he said.

The hospital features solid wood doors, enlarged for equipment or wheelchairs to pass through, as well as a pneumatic tube system so nurses and doctors can easily send materials from floor to floor. The building also has a tracking system that can track equipment or staff members through their nametags, Granger said.

On the completed floors, patient rooms already have some equipment installed in the walls. Beds are placed against the wall so patients can see out the door or nurses can crack the door open to check on patients and family without having to interrupt private moments — another example of smart design, Granger said.

Also, patient rooms feature large windows to let in sunlight and provide views of the landscape beyond.

Granger said because of the work that has already been completed, the building can’t be easily converted into another type of workplace.

“This is the only real functional use of this hospital because of how much has been done,” he said. “It’s not like you can turn it into an office building or anything like that.”

The ICU floor is completed and is also state-of-the-art, Granger said.

ICU patient rooms feature glass walls so caretakers can check on patients without disturbing them. Each room has a toilet and sink so waste can be disposed of without having to transport it outside the room, cutting the risk of contamination, he said.

“These are by far the largest ICU rooms I’ve ever seen,” he said.

Currently, Trinity is housed in a 45-year-old facility on Montclair Road in Birmingham. Granger said the U.S. 280 facility would be a “quantum leap” for Trinity.

“This would be a quantum leap beyond (the current facility) in terms of design, space and layout,” he said.

“We feel very confident in where we are. If you put patient care first, there is no question this building needs to be completed and used,” Granger said.

He said the economic impact of the hospital would be enormous, as the Daniel Corporation would also work to construct a hotel adjacent to the nearby Cahaba Grand Conference Center, as well as additional office and retail space. At least 5,500 new jobs would be created with the hospital and other pending projects, Granger said.

“One economist that studied it said it would be the equivalent of Mercedes-Benz coming to Alabama,” he said. “Millions in tax revenue would be generated.”

However, Granger said his biggest concern isn’t the economic impact but the personal impact for countless families.

“The ones I feel most concerned about are the people who need care and don’t have easy access,” he said. “It’s not unusual for us to be standing here, doing what we’re doing right now, and see an ambulance passing by going downtown. We want you to be able to turn off 15 to 30 minutes earlier.”

The Pelham City Council likely will decide if it will change the Pelham Civic Complex's name during a Jan. 8... read more