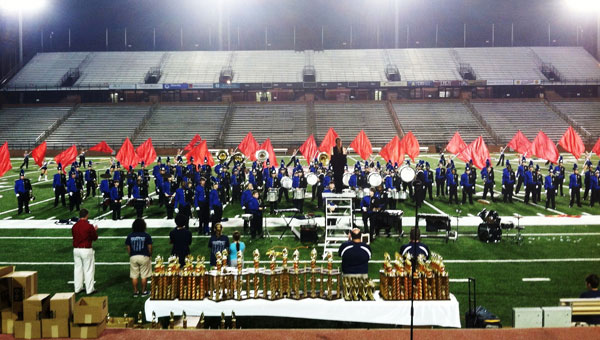 The Calera High School Eagle Band was invited to march in the 57th Presidential Inaugural Parade in Washington, D.C. (Contributed)

CALERA – The Calera High School Eagle Band was invited to march in the 57th Presidential Inaugural Parade in Washington, D.C., and needs the community’s help to make the trip happen.

The Presidential Inaugural Committee notified the Calera High School Eagle Band that it been selected to participate in the Jan. 21, 2013 parade Dec. 18.

According to Calera High Band Booster President Cindy Glass, out of the 2,800 applications submitted, only one band from each state is chosen to participate.

“We are going to have to raise a lot of money really quick,” Glass wrote in an email. “We are asking everyone that can help to please do so. It is going to cost each child and adult that goes $400 each. This is a once-in-a-lifetime chance for these kids and our community.”

The trip will cost around $60,000 for the entire band to attend. To raise this money, the band is asking the entire community, as well as businesses, friends and family, to grant these students with the opportunity of a lifetime, according to release from the Shelby County Board of Education.

“This is an honor not only for the school, but for the city of Calera, Shelby County and for the state of Alabama, and we need your help to get there,” said Ryan Murrell, Calera High School band director.