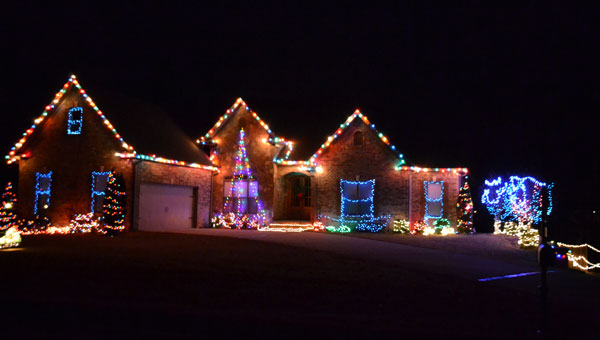 CHELSEA – After seeing “Christmas Vacation,” a Chelsea man decided to try his hand at decorating his home.

“I remember seeing ‘Christmas Vacation’ with Clark Griswold putting up the lights and always thought it was a neat thing,” Wyatt Roscoe said.

Roscoe lives in a new Chelsea subdivision, Highland Ridge. The subdivision isn’t complete, so only about eight families live in the neighborhood. Roscoe and his wife moved into the neighborhood about four years ago, and started putting lights up around Christmastime.

“As we started getting neighbors in, they saw us putting lights up, so they started too,” he said. “I went all out last year, and they’re pretty competitive, and they went out this year.”

After getting on his roof to decorate last year, Roscoe’s wife said “no more,” so he rented a lift to add lights to their home.

“I have a neighbor down the street who said he’d never put up lights, but he has now,” Roscoe said.

Roscoe said that since Highland Ridge is a new subdivision, many people don’t know it exists to drive through for Christmas-light viewing.

“When I was a kid, after the Christmas Eve service, my family would always drive around and see Christmas lights in the neighborhood,” Roscoe said. “I’m trying to keep the tradition going.”