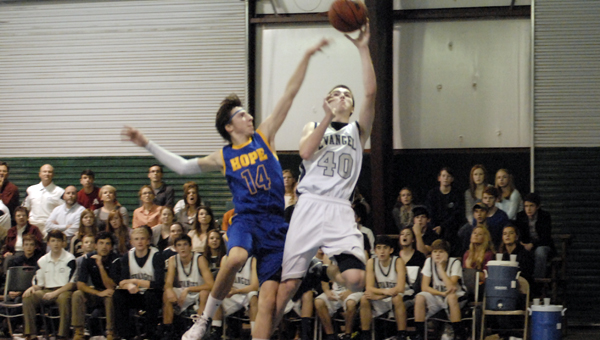 ALABASTER – The Evangel Christian Lightning fought off a late third-quarter rally by the Hope Christian Eagles for a 61-43 victory Dec. 18.

“It was a good win for us tonight,” said Evangel head coach Rusty Palmer. “There was good energy in the crowd and our guys fed off of that. We made it a full-court ball game and I thought that was the difference.

Josiah Drew hit a field goal to cut the deficit to eight, but the Lightning responded with 9-1 run to take a 51-35 lead midway through the fourth.

Grayson Melick led Evangel with 15 points while Josh Letson added 14 points for the Lightning. Judson Moses and Doug Battle each finished with 11 points.

Lady Eagles hold on for win over Evangel