Lady Eagles hold on for win over Evangel 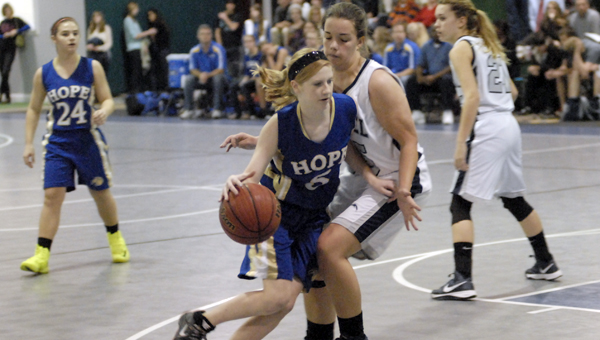 “I thought it was a very tough game,” said Hope Christian head coach Mike Jones after the win. “Evangel Christian is a very good team. Whenever we get together it’s always a close game – and it was no different tonight.”

The Lady Eagles (7-2) extended a two-point halftime lead to nine in the third quarter, but the Lightning (4-5) refused to go away quietly.

Hope Christian extended their lead to 11 early in the fourth, but the Lightning responded with a 5-0 run to cut the Lady Eagles’ advantage to six, 30-24, with about five minutes left to play.

“We just chipped away,” said Evangel head coach Ken Letson. “We were down by nine going into the fourth quarter and we know that there are no 9-point baskets. We chipped away and got into a press that we didn’t run much of the game.”

Evangel’s Madison Thames hit a 3-pointer then another basket after a Hope turnover to cut the deficit to one, 30-29, with less than four minutes to left.

The Lady Eagles picked up a pair of Joelle Reed free throws to extend their lead to three, but an Anna Brayers’ basket cut the score to one, then the Lighting took the lead on a two free throws by Jessyea Ray to take a 33-32 lead with 1:36 left in the game.

“We knew at some points they were going to make shots,” Jones said. “We were lucky the last few didn’t fall. We just held on.”

Karlee Tate regained a 34-33 advantage for Hope and Erin Douglas sealed the win with a basket with 11 seconds left.

“I think we just ran out of gas once we caught them,” Letson said.

Christiana Jones led Hope with 10 points while Lindy Walker and Douglas each added eight points for the Lady Eagles.

Anna Bryers led Evangel with 10 points and Bethany Letson and Thames each scored seven points for the Lightning. Ray added seven points including 4-for-4 from the free throw line in the fourth quarter.